The Russians are threatening a new offensive in northern Ukraine from Belarus. On the spot, the Ukrainian soldiers are preparing for this scenario and monitoring the border. 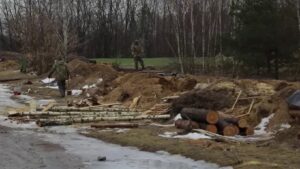 On images released by the Russian Ministry of Defense, we see Russian soldiers on maneuvers a few kilometers from Ukraine. The message is clear, all these soldiers, deployed in Belarus, are preparing for war. On the Ukrainian side, border guards and soldiers are considering the worst scenario: that of a new invasion. “It’s for our defense above all. Because today we are in an artillery war, that’s our security and our life,” said a Ukrainian soldier in a trench.

To bury oneself is to protect oneself from the fragments of bombs and missiles, but also to be able to attack better. Even if the days are endless and cold, the faces marked by ten months of war, the soldiers still believe in their ability to win the conflict. For the Ukrainians, the presence of the Russians in Belarus could also be a diversionary attempt, with the aim of returning to the attack in the Donbass. The dozens of new trenches, reinforced by minefields, are intended to stop invasion attempts from neighboring territory, 9 kilometers away.

Today News Post - November 22, 2022 0
Not in the best of moods when entering the World Cup on Tuesday against Australia, the France team has many areas to work on...