In November 2021, 27 migrants died when their makeshift boat sank in the English Channel. The investigation is progressing and according to elements of the legal file, the emergency services did not measure the urgency of the situation. 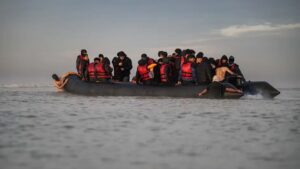 These are exchanges that send shivers down your spine. The investigation into the sinking of a migrant boat on November 24, 2021 is overwhelming for French relief. This was revealed by the newspaper Le Monde on Sunday November 13. Elements of the judicial file that the Investigation Unit of Radio France was able to consult, show that the emergency services did not measure the urgency of the situation, which resulted in the death of 27 migrants.

On the night of November 23 to 24, 2021, the migrants on this boat in difficulty called or tried to call French rescue services 18 times. They dialed either 196, the number of Cross, which depends on the maritime prefecture, or 112, the number of Samu which then transfers calls to Cross. On six occasions, migrants in distress sent their geolocation to the Cross, according to an excerpt from the first call:

“I sent you our position on WhatsApp, do you have it?” asks a passenger on the boat. “I haven’t received anything. Not yet,” replied the Cross. “But I sent it to you, maybe it’s a connection problem. – Yes I think it’s your network. But go back to your phone. When I get your location, I’ll send you a rescue boat “, assures the Cross. “And now you have received it?” asks the migrant. “Ah yes I received it! Well wait, I’m calling a rescue boat”

However, the Cross does not send a rescue boat. He informs the English emergency services in Dover, betting on the fact that the migrants would soon arrive in British waters. The passengers of the boat, in particular women and children, are panicked. They keep calling the Cross over and over. There are tears, there are cries. The operator tells them to “keep calm” and that “help will arrive”.

“Go pschitt, your migrant thing there”

At 2:28 a.m., the migrants finally reached English waters. The Cross, the regional operational center for maritime surveillance and rescue, receives the boat’s new position and warns its British counterparts. A quarter of an hour later, a new exchange between the French relief workers and the migrants. The situation is very confused, it must be said that 40 boats attempted to cross the Channel that night. “Hello, help me, can you help me?” we hear in the exchange. “I don’t have your location. I can’t help you. “I already gave it to you,” replies the migrant. “You told me we were in English waters.” “Then you can call 999,” insists the Cross. “Yes I called 999 but… – What? – I called 999 but…” The migrant does not finish his sentence: “Can you wait, I’ll pass the English on to you”. The operator hangs up, we hear her saying aside to a colleague: “Go pschitt, your migrant thing there”.

In response to this damning investigation, the supervisory authority of Cross, the maritime prefecture of the Channel, explains that it does not have access to the judicial file and that it cannot comment on fragmented information. The spokesperson told Radio France’s Investigation Unit that its teams are doing their best to rescue migrants, but reminds that crossings are increasing exponentially. Finally, in the legal file, there is no mention of the activity of the English relief workers that night. We don’t yet know why they didn’t intervene either.