This was declared by the French president on Wednesday during a speech at the G20 in Bali. 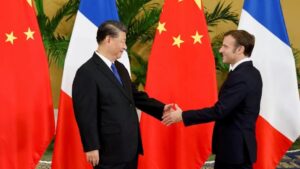 Emmanuel Macron said on Wednesday, November 16, that he wanted China to play “a greater role of mediation” in the war in Ukraine. “There is a space for convergence, including with major emerging countries like China and India, to push Russia to de-escalate,” the French president told reporters after the G20 summit in Indonesia. . He said he had discussed with Chinese President Xi Jinping a “principle” of a visit to China in early 2023.

>> War in Ukraine: find the latest information in our live

Chinese Foreign Minister Wang Yi called on Ukraine and Russia not to let the war “spill over” from the UN General Assembly podium in New York. “The priority is to facilitate peace negotiations”, he insisted, calling for a “peaceful resolution of the Ukrainian crisis” through “fair and pragmatic” discussions. Officially neutral, China is sometimes accused by Westerners of being too conciliatory with Russia.

After the missile fall in Poland, Beijing called on all actors to “calm”. “China’s position on the Ukraine issue has been the same from the beginning and it is clear: the top priority is to conduct dialogue and negotiations to resolve the crisis peacefully,” a ministry spokeswoman said. Chinese Foreign Affairs.