The totalitarian regime of Alexander Lukashenko, an ally of Moscow, is stepping up the repression against opponents with the opening of this emblematic trial. 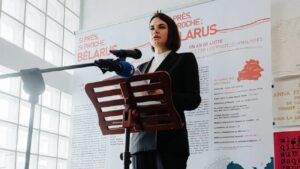 Svetlana Tikhanovskaia on a visit to France, gives a press conference at the Maison des Journalistes in Paris, September 15, 2021. (MAXPPP)

Svetlana Tikhanovskaïa, 40, in exile in Lithuania, has become the flag bearer of the opposition. She fled the country after the arrest of her husband, opposition leader Sergei Tsikhanovski. And Tuesday, January 17, quite a symbol, at the precise moment when her trial will open in absentia, she will be in Davos, at the World Economic Forum, to convince the powerful of the need to help the opposition. This trial says a lot about the determination of the dictatorship in power in this country of nine million inhabitants, this Belarus that opponents prefer to call Belarus. Alexander Lukashenko, two and a half years after the popular uprising against his rigged re-election, is now attacking opponents in exile. He had the law amended to this effect, and since the beginning of January, exiles can even have their Belarusian nationality withdrawn. The measure could affect thousands of people who could thus become stateless.

Svetlana Tikhanovskaya faces 15 to 20 years in prison. She is being prosecuted for 10 charges including “conspiracy to seize power”. And she will not be the only exile to be tried in absentia from this January 17: this will also be the case of another emblematic opponent Pavel Latushko, former Minister of Culture who founded a kind of parallel government in Warsaw in Poland.

Trials are also increasing against opponents who have remained in the country with new appearances every week. Monday, January 16, it was the journalist Andrzej Poczobut, figure of the Polish minority in the country, who was in the box, during a trial behind closed doors in the city of Grodno, near Poland. Poczobut, who works for the famous Polish newspaper Gazeta Wyborcza, is being prosecuted for “incitement to hatred”. He faces 12 years in prison.

Today the shameful trial against famous journalist & member of the 🇵🇱 minority Andrzej #Poczobut started in #Belarus. He held the regime accountable & dared to tell the truth about the situation in the country. Andrzej has serious health problems & must be released immediately! pic.twitter.com/hDyU6NvxwP

On January 9 other journalists, from the independent website Tut, were also in the box, accused of tax evasion. And on January 5, the trial of Nobel Peace Prize winner Ales Bialatski, founder of the human rights NGO, Viasna, began. Bialatski, 60, appeared very thin during his appearance. He too is accused of tax evasion and disturbing public order. In total, according to Viasna, the country has 1,444 political prisoners. Cases of torture number in the thousands, more than 500 NGOs have been closed.

Lukashenko tacks on the war in Ukraine

This judicial harassment comes at a time when Vladimir Putin is once again seeking to drag Belarus into its war in Ukraine with new joint Russian / Belarusian military exercises starting Monday, January 16. They should last two weeks. And everything points to the sending of new Russian equipment to Belarusian soil, near the Ukrainian border north of kyiv. This is one of the axes used by the Russian army at the start of the war, almost 11 months ago.

However, Belarusian troops themselves have not directly taken part in the conflict so far. Lukashenko dodges: he is allied with Moscow, he suppresses the opposition like Putin, but he is dexterous enough to avoid being directly drawn into the war in Ukraine. This situation complicates the task of the opposition, whose objective is to persuade the West to see the issue of Belarus as inseparable from that of Ukraine.

Today News Post - January 14, 2023 0
Two hundred and fifty-six players are in the running for the first Grand Slam of the year 2023, which begins on Monday. Novak Djokovic in...