The tornadoes in the North, Sunday October 23, shook France. Disasters that are difficult to predict and which could be more and more common with global warming. 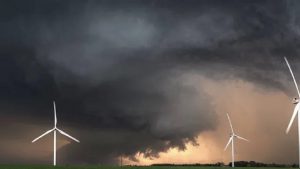 A dark, intriguing and threatening sky. These are the premises of a tornado. For it to form, two masses of air are needed, one cold at altitude, the other hot near the ground, which oppose each other and cause a storm cloud. The tornado comes from strong winds and changing currents. Such an event is difficult to predict. “These kinds of phenomena still slip through the cracks of our forecasting models (…). They manage to see phenomena of the order of magnitude of a kilometer and there, we are still well below”, explains Patrick Galois, forecaster at Meteo-France.

“There are more privileged regions, in particular the plains regions (…) because storms have more time there to develop and spread”, confides Jerome Cerisier, forecaster at Weather Solutions. In the North, a tornado of rare intensity killed three people in 2008. There are between 20 and 50 per year, a stable figure. In the future, global warming could create favorable conditions for the development of these phenomena.

Today News Post - November 20, 2022 0
This Swedish retiree left on July 1 and arrived for the opening of the COP ten days ago in Egypt. A journey intended to...