Unveiled on Thursday October 27, the route of the Tour de France 2023 is particularly demanding. The runners will cross the five mountain ranges of France. 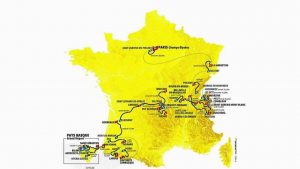 For its 110th edition, the Tour de France will be resolutely turned towards the mountains. From July 1 to 23, 2023, a course of more than 3,400 km awaits the runners. They will start from Bilbao, in Spain, before joining Bayonne and Pau for a first mountainous stage in the Pyrenees-Atlantiques. Then will come the Massif Central, where the Grande Boucle will find one of its mythical peaks, the Puy de Dôme, after 35 years of absence.

It will then be necessary to cross the stages of the Jura, the Alps and the Vosges, before the final sprint and the arrival on the avenue the Champs-Elysees in Paris. In total, the runners will visit the five mountain ranges of France, with a record 30 passes to cross, for nearly 56,000 meters of elevation gain. A demanding course, which is already the dream of those who hope to succeed the winner of the last edition, the Dane Jonas Vingegaard.

Today News Post - November 9, 2022 0
Buckhead's committee chairman is preparing a divorce from the municipality of Atlanta, Georgia, USA. The inhabitants of this upscale neighborhood want to distance themselves...