The Danish Prime Minister is playing her political future in legislative elections with an uncertain outcome. If the left is opposed to a bloc bringing together the right and the extreme right, everyone agrees on the migration policy. 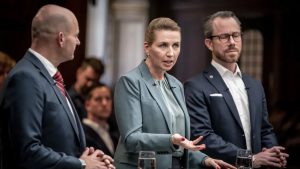 Jakob Ellemann-Jensen, chairman of the Liberal Party of Denmark, Mette Frederiksen, Prime Minister of Denmark and chairwoman of the Social Democrats, and Soren Pape Poulasen, chairman of the conservative People’s Party, at the debate for the Danish parliamentary elections, October 16, 2022. (MADS CLAUS RASMUSSEN / RITZAU SCANPIX / MAXPPP)

In a country where 11% of the population is of foreign origin – nearly 60% of whom come from a non-Western country – the question of immigration has long been a controversial subject. Today, the Danish parties are in unison in favor of a policy of rigor in terms of migration: now, left and right want a strict limit on the number of foreigners settling in Denmark. Outgoing Social Democrat Prime Minister Mette Frederiksen sees it as a necessity to maintain the “welfare state”, a system that is both generous and very costly, which places Denmark at the top of the heaviest compulsory levies in the European Union,

The other fear of the public authorities in recent years is the creation of ghettos, particularly within the Muslim community. A year and a half ago, Denmark passed a law authorizing the relocation of asylum seekers outside the European continent. At the beginning of September, an agreement with Rwanda was reached to send migrants there, in the vein of the one made last spring between the United Kingdom and the Rwandan authorities.

The outgoing Prime Minister’s Social Democratic Party last week announced a plan to raise the salaries of civil servants and nurses.
The head of government is also relying on the measures intended to deal with inflation. If she has a good record in the fight against the Covid pandemic, Mette Frederiksen, however, experienced a political setback after ordering the slaughter – for health reasons – of 15 million mink, a decision legally contested. The right is campaigning on tax cuts and strengthening the health system.

58% of Danes believe that Mette Frederiksen is best placed to lead the country. But the political forces in Denmark are very dispersed: a dozen parties in total can hope to win seats in Parliament. One of the headliners is former Prime Minister Lars Rasmussen, who governed between 2009 and 2001, then from 2015 to 2019. Coming from the liberal party, he created his own formation Les Moderés which, like its name l indicates, is at the center of the political spectrum. Lars Rasmussen may be the kingmaker, since he has not yet decided on a possible alliance with the right or the left. On paper, neither bloc would be able to secure a solid majority in parliament.

Today News Post - September 24, 2022 0
Bigger than you think! If you drive past power lines or just look at them from the ground, these balls don't look very big and...