Abstention reached a record level in the legislative elections on Saturday, proof, according to the opposition, of a major disavowal of the executive. 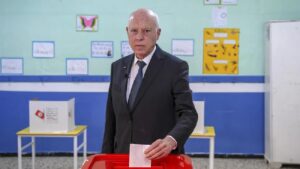 Political storm in Tunisia. The leader of the main coalition of opponents in Tunisia on Monday December 19 called on President Kais Saied to “leave immediately”, after the fiasco of the legislative elections the day before, marked by a massive abstention rate of more than 92%. In a telephone interview with AFP, the president of the National Salvation Front (FSN), Ahmed Nejib Chebbi, considered that this election “shows that very, very few Tunisians support Kais Saied’s approach”.

This is the worst turnout in elections in Tunisia since the 2011 Revolution, which ousted dictator Ben Ali from power and brought about the first democracy in the Arab world. “It is a great popular disavowal”, commented Nejib Chebbi on the political maneuvers of President Saied, who had frozen Parliament at the end of July 2021 and dismissed his Prime Minister, thus seizing all powers.

After his coup and then the dissolution of Parliament, denounced for months as “a coup” by the opposition, President Saied had a controversial Constitution adopted this summer by referendum, which drastically reduces the prerogatives of Parliament. He also reformed the voting system used on Saturday for the legislative elections, by prohibiting any political affiliation for candidates. Changes that have provoked the ire of most Tunisian parties, with the effect of a broad boycott of the election organized this Saturday.

For political scientist Hamadi Redissi, interviewed by AFP, this extremely low participation rate in the legislative elections “is unexpected because even the most pessimistic forecasts were counting on 30%” as in the referendum on the Constitution. “It is a personal disavowal for Mr. Saied who decided everything on his own,” added the expert, believing that “his legitimacy is in question”. However, according to the specialist, “the situation is blocked” because “there is no legal mechanism to impeach the president” in the new Constitution of 2022. The future Parliament will, at best, only have the possibility of censuring the government – but after a long and complex process.

Today News Post - November 13, 2022 0
Affairs rarely end well—but these historical affairs ended in ways that can only be described as “utterly disastrous”. From the scandalous side pieces of...

“All the windows were destroyed, the ground completely flooded”: after the ransacking, the long restoration of the presidential palace in Brazil

Peru: two dead and several injured during protests against the new president