The explosion took place in a busy street in the capital. According to the governor of the city of Istanbul, the injured were taken care of. 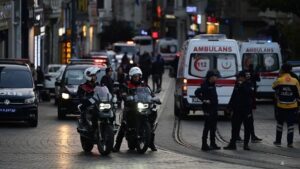 Emergency services in Istiklal Street, in Istanbul (Turkey), the scene of an explosion that killed several people, on November 13, 2022. (YASIN AKGUL / AFP)

A strong explosion of unknown origin sounded on Sunday afternoon (November 13th) in the busy shopping street of Istiklal, in the heart of Istanbul, Turkish media reported. According to a latest report, 6 dead and 81 injured are to be deplored. Turkish President Recep Tayyip Erdogan for his part denounced “a vile attack”.

“The first observations suggest a terrorist attack,” said the head of state, adding that “a woman would be involved”, without further details. “The perpetrators of this vile attack will be unmasked. Let our people be sure that the perpetrators will be punished,” he said, two hours after the explosion. According to Turkish Vice-President Fuat Oktay, “a woman” was behind the attack. “We consider it to be a terrorist attack due to the explosion of a bomb set off by an assailant who would be a woman, according to initial information,” he told reporters on Sunday evening. The attack had not been claimed in the early evening. 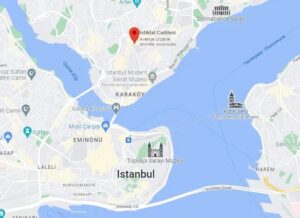 The shopping street of Istiklal, in Istanbul (Turkey), the scene of an explosion which killed several people, on November 13, 2022.

The explosion occurred shortly after 4 p.m. (2 p.m. Paris time), when the crowd in Istiklal Street, a popular place for Istanbulites and tourists to walk, was particularly dense. According to the images broadcast on social networks at the time of the explosion, it is heard from afar, accompanied by flames and immediately triggers a movement of panic. A large black crater is also visible in these images, along with several bodies on the ground nearby.

Less than an hour after the events, the Turkish Audiovisual High Council (RTUK) banned the audiovisual media from broadcasting images of the scene. According to the AFP videographer who went there, the police established a wide security cordon to prevent access to the bruised area for fear of a second explosion. An imposing deployment of security forces also blocks all access.

Istiklal Street had already been hit in the past during a campaign of attacks in 2015-2016 which notably targeted Istanbul. Claimed by the Islamic State group, it had killed nearly 500 people and injured more than 2,000.

Today News Post - December 3, 2022 0
Like every day, the 11 p.m. news takes a tour of the news broadcast by European television channels. It's Eurozapping on Thursday, December 1st. Spain...