Faced with what they consider to be a “human and environmental disaster”, fans, anonymous people and public figures refuse to follow the Football World Cup organized in the emirate from November 20. 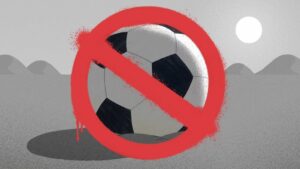 “And you, are you going to boycott?” For some, the issue is almost a matter of conscience. Should we watch the FIFA World Cup in Qatar or not, in a context marked by the many human, social and ecological aberrations of the event? A few days before the start of the World Cup organized in the emirate, on November 20, this debate torments football fans, temporary supporters and others.

The first to have really lit the fuse of the boycott is called Eric Cantona. In January, the former footballer turned actor had said all the bad things he thought about this competition, “which is not a real World Cup” and which he will not watch on television. “Qatar is not a football country, he had advanced in the Daily Mail *. It’s only a story of money, and the way they treated the people who build the stadiums is a horror , thousands of people died.”

Actor Vincent Lindon, author Virginie Despentes, German football world champion Philipp Lahm… Other media and sports figures have since joined the boycott camp of this event which crystallizes the debates. Their reasons are numerous: non-respect of workers’ rights, with the death of several thousand workers in the country since 2010, according to an investigation by the British daily The Guardian*, ecological aberration, rights of women and LGBT+ people, and even suspicions of corruption when awarding the competition in 2010.

“It’s the World Cup of scandal, the one that illustrates all the excesses of football, it’s almost caricatural, gets carried away the writer Olivier Guez, a big fan of football. Football has become a huge entertainment industry . I was offered to go, I said no.” A World Cup is however a rare, unique moment, “a period when we fall back into childhood”.

He won’t go to Qatar either. Soufyane Guesmia, 33, including seven to follow the Blues around the world, will boycott “100% the World Cup”. However, football is his life, his passion, so much so that he traveled 70 hours by bus with the group of Irresistible French supporters to reach the base camp of the French team in Istra (Russia) during the Cup World Cup 2018. “I will not go and watch a match. Six thousand five hundred workers died, and Qatar speaks [for a majority of cases] of ‘natural deaths’. What cynicism!” plague this supporter of the Red Star.

“I have values and I need to be consistent with myself. If I had decided to go to Qatar, on these infrastructures built on blood, I would not have been able to look at myself in a mirror.”

The speech of this supporter of the Blues joins that of Vincent Lindon, who will also boycott the Qatari World Cup. “We are in a giant asylum: the same year, there are Winter Games in a country where there is no snow [in China] and [a World Cup] in a country where it is 60 ° C in the shade. It’s an ecological aberration”, launched the actor on the set of “It’s up to you”, at the end of August.

In addition to the flouted human rights – the magazine “Complement of survey” revealed in particular the indecent living conditions of the “little hands” of the hotel des Bleus in Qatar – the ecological disaster tenses the fans. In question, in particular, the carbon footprint of the competition, the stadiums and metros built for the event or the 160 daily planes to transport supporters from the neighboring countries where they will be staying, according to the Obs.

“We do not have the right to close our eyes to a reality that everyone knows”, considers Jean-Francois Debat, PS mayor of Bourg-en-Bresse (Ain), “supporter of the Greens” of Saint-Etienne and great reader of the team. “In my city, we may be closing swimming pools this winter because of energy costs and depriving kids of a hobby while at the same time, we are going to air-condition stadiums”, laments the elected official. , who will not organize anything in particular in his city and will not watch a minute of the competition on TV.

“On the one hand, there are millions of people exploited to build air-conditioned stadiums and, on the other, a competition which will generate enormous profits for the federations, the sponsors, the broadcasters, Qatar”, regrets Maelle , activist in the environmental civil disobedience movement Extinction Rebellion and member of the Red Card collective, which calls for a boycott.

Faced with “a human and environmental disaster and a revolting ecological aberration”, she plans with her movement “actions during the World Cup so that there is awareness”. “If, after this World Cup, the football community takes greater account of social and environmental issues, it will already be a victory. The idea is to create something,” she judges.

Mobilizing is also the credo of Flavien Rosso and Dorine Brouwer. The first is responsible for the sports department of The Reunion Daily, the second manager of a bar in Redon, in Ille-et-Vilaine, and the two will boycott the competition.

“It’s not a satisfactory solution, but it’s the best way to sound the alarm,” explains Flavien Rosso, whose newspaper does not have the means to send a reporter to Qatar anyway. “We will not talk about the sporting aspect, because we believe that it is difficult to get excited about this event, but we will relay the side effects, any events.” This choice involves constraints – “If McDonald’s communicates about the event, we won’t take its ads” – and internal tensions, but Flavien Rosso assures us: the daily “will boycott until the end, even if France goes in the final and wins.

Dorine Brouwer took over the bar The Nautical, a small troquet which borders the Vilaine in Redon, in June. This Dutchwoman, “always in orange on match days”, will not broadcast the matches and will not watch those of her country of origin. Although she risks losing money, she hopes her bar will “become a haunt of those who boycott”. “If I broadcast matches, that implicitly means that I agree with this World Cup. And I’m not,” she explains.

Paris, Marseille, Lyon, Bordeaux, Lille… At the beginning of October, many cities also announced their wish not to broadcast the competition on a giant screen, for moral, but also economic reasons, in the midst of the energy crisis. The mayor of the northern capital, Martine Aubry, thus qualified the holding of the World Cup as “nonsense with regard to human rights, the environment and sport”. “If I were head of state – I am no longer so my position is easy – I would not go to Qatar”, for his part declared Francois Hollande, who did not specify whether he would look the competition.

“It’s a personal choice, but not only”, judge for his part the former presidential candidate of the NPA Philippe Poutou, for whom these actions “exert pressure in the face of the cynicism of the political world and the neutrality of sport which puts aside all human dramas”. “Sport is a tool of propaganda and instrumentalization in the service of the powers, but it can also be a tool of protest.”

As for the members of the main association of supporters of the Blues, they will be “six times less” numerous in Qatar than four years ago in Russia. Fabien Bonnel, founding member of the irresistible french, explains: “The whole system works around the supporters: without them, no audience, therefore no television rights. If we want Fifa to move, we have to show that we are not fools.”

Today News Post - November 16, 2022 0
Strikes on Ukraine, explosion in Poland... Tuesday marks a turning point in the conflict between Russia and Ukraine. The city of Lviv (Ukraine), located near...