Hard hit by Russian strikes, kyiv and Kharkiv are now without electricity and its inhabitants have taken refuge in metro stations. 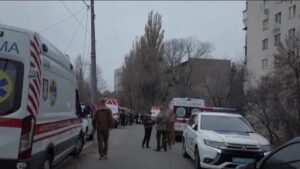 The city of kyiv, almost plunged into darkness. Two buildings are on fire. Russia would have sent more than 100 missiles, according to the Ukrainian army. Energy installations are the main targets of these strikes, which left one dead.

“We know what the enemy wants. He will not achieve his goal, warns Volodymyr Zelensky, President of Ukraine. I ask everyone to be careful and stay in the shelters for the time being. I know that the strikes have knocked out electricity in several cities in the country, we are working on it, we will survive everything.”

In Kharkiv, testimonies of cuts are also reported. “We immediately understood that there were strikes in the city, notes Clara Marchaud, journalist. We also immediately understood that the strikes had fallen, because it could be the anti-aircraft defenses. For the moment, we have not had confirmation because the authorities do not give immediate information. They only say if it is a civil or military infrastructure, there apparently it is a civil infrastructure. In the midst of the G20, Ukraine awaits an international response to these new Russian attacks.

Today News Post - September 26, 2022 0
What causes those little holes in clothes? I'm sure you know that feeling: you take a t-shirt out of the closet and realize that it...