Freed from Russian troops, the city of Kherson regains its calm but the damage caused by the occupation makes the daily life of the inhabitants complicated. 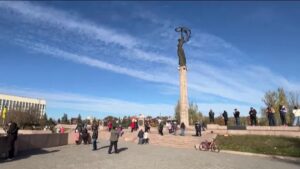 Since the liberation of Kherson, the banks of the Dnieper River have become an obligatory passage. They are the supply point for running water. “The situation has really become catastrophic throughout the city, we have no water, no electricity, no heating. The most complicated thing is the lack of water. But we have no choice, we have to face up and organize ourselves”, laments a resident of the city. Although the river water is not drinkable, everyone comes with their own bottle or bucket to meet their sanitary needs.

The telephone network is affected

The telephone network was also damaged when the Russian soldiers left. The Dnieper bank is one of the few places with a functional connection. “We still have a lot of work to do to help the inhabitants, nuance Serhii Khlan, deputy of the Council of the oblast of Kherson. But we also have to solve the security problems and in particular the demining of the city and its surroundings. It is far from over in Kherson.”