David Teurtrie, lecturer in political science at the Catholic Institute of Higher Studies, also explains that Western sanctions are having a lesser than expected impact on the Russian economy. 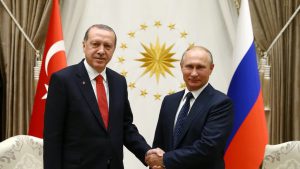 “Russia is forced to review all the logistics of its foreign trade and for this Turkey has an important role”, confirms this Saturday, October 29 on franceinfo David Teurtrie, lecturer in political science at the Catholic Institute of Higher Studies , associate researcher at Inalco, author of “Russia, the return of power”. Since the beginning of the year, between January and August, more than 700 companies with Russian capital have been set up in Turkey, the majority of them in the wholesale and retail sector. Westerners are worried that Turkish territory will allow Moscow to escape economic sanctions, which Ankara refuses to join.

Russia is doing everything to circumvent Western sanctions?

David Teurtrie: Of course. Then, Russia is forced to review all the logistics of its foreign trade and for this Turkey has an important role, a role of intermediary. European products are exported to Turkey and then directly re-exported to Russia. There are products under sanctions but there are also those which are no longer exported directly to Russia because European companies refuse to work with Russia, without the sanctions talking about it. We must therefore make allowances: a good part of the trade passes through Turkey, without necessarily being a circumvention of the sanctions. But what is certain is that it very largely allows Russia to reorganize foreign trade and Turkey to stabilize its economy since Turkey, for several years, has been in economic difficulty.

Does this reorganization of Russian foreign trade testify to a form of effectiveness of Western sanctions?

The sanctions have hit the Russian economy as it is in recession, but the impact is less than expected. For several months, the IMF [International Monetary Fund] has been revising each time in its forecasts the decline of the Russian economy to lower levels than what was expected. Currently, we are at around minus 3%, which is relatively low compared to the scale of the sanctions, which are unprecedented. And if also we say that in the West the recession is not far away. Then, the reorganization of foreign trade is also a way for Russia to find new partners. The situation is complex. Russia is suffering, that’s for sure and it will continue. But since the first crisis in Ukraine in 2014, the Russian authorities have been working to make the economy more robust.

On a different topic, Ukrainian President Volodymyr Zelensky announces that nearly four million inhabitants are affected by power cuts in the kyiv region. Vladimir Putin wants to show the Ukrainians that he can make life difficult for them, despite the military difficulties he is experiencing?

Yes, it’s a new approach: target the country’s economic infrastructure. In this case, most power plants. There is undoubtedly an ultimate objective which would be to obtain the capitulation. This was declared by the new general Sergei Surovikin, recently appointed to head the Russian troops in Ukraine. And then – in between – there are various more concrete objectives: to prevent, or in any case hinder, the transport of armaments from the West to the front in the East, to put an end to the export of Ukrainian electricity to the Union European Union, then make the cost of the war higher and higher for Ukraine and for the West.

Russia announces that it has recruited 300,000 reservists, including 41,000 already deployed on the ground. What do we know today about the anger movement that was born from this call for mobilization?

There was indeed a movement of feeling of defiance in Russian society. He expressed himself through emigration for those who were able to leave. Several hundred thousand Russians have left the country. But since then the situation inside the country has largely stabilized. Yesterday evening, Defense Minister Sergei Shoigu officially announced the end of the mobilization period. According to him, the account is there: 300,000 soldiers for some already deployed effectively, and others in training on Russian territory.

Today News Post - September 25, 2022 0
From Adele to Queen Latifa and Chaka Khan! If you want to be comfortable in your own skin, shedding a few pounds can definitely help...