Russia allows the use of nuclear weapons to repel the Ukrainian counter-offensive led in the region of Kherson, in the south-east of the country. Bluff or real threat? The soldiers confided about their fear and disillusionment in the event of a disaster scenario. 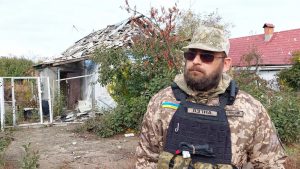 Igor, head of the Anubis platoon in the Ukrainian army, in the Kherson region. (GAELE JOLY / RADIO FRANCE)

What if Vladimir Putin pressed the button? It’s a conversation they often have with each other. On the front, in the evening at the time of confidences, the Ukrainian soldiers evoke the nuclear threat brandished by Moscow to push back their counter-offensive towards the east, in particular in the region of Kherson, where everything could change.

Oleksandre, infantry soldiers, never leaves his mobile phone to keep up to date with everything that Vladimir Putin foments: “Of course it scares me. Very scared. Already, it’s scary when the Russians fire weapons not prohibited by the Minsk agreements. They do this very often, they don’t care, they shoot anything and they violate international agreements.”

“If we are in the epicenter area then we are lucky to be able to die very quickly. If we are caught by the nuclear cloud a little further away then we have less chance because we will suffer and end up dying.”

The battalions follow training to prepare for the worst but Igor, head of the Anubis section, very close to Kherson in Mykolaiv, recognizes his helplessness. “It’s a risk that we are considering and we have procedures. But to be frank, if it happens, we cannot seriously prepare for it, admits the soldier. There, as we are near Kherson, we will have the chance to die quickly. Of course we hope that will not happen. But only the good Lord can tell us if this madman [Vladimir Poutine NDLR] will press the button or not.

Prepare for the worst

The Ukrainian army has trained its soldiers in the first reflexes to adopt. “All the staff are well trained to use iodine or other means against radiation, describes Igor, but if you find yourself under the bomb, iodine will not be able to do anything for you. Even gas masks, it may just extend the life by an hour, but not more.” Despite the threat Igor wants to keep fighting. “I lost too many friends in this war, confides the soldier, we have to end it as soon as possible.”

For its part, Russia accuses kyiv of preparing a “dirty bomb”, a radiological bomb, which Ukraine denies. The fear is that Vladimir Putin will use these accusations as a pretext. A way to justify the use of a bomb loaded with radioactive components.