On the Ukrainian side, the chief of staff of the presidency estimated on Telegram that the Russian economy would be “destroyed” by this measure. 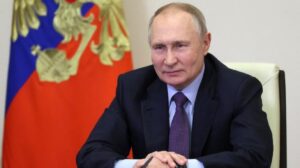 Russia affirms, Saturday, December 3, that it “will not accept” the capping of the price of its barrel of oil at 60 dollars. This measure must come into force on Monday, after the agreement sealed by the countries of the European Union, the G7 and Australia, in order to limit the income of Moscow to finance the conflict in Ukraine. The spokesman for the Russian presidency, Dmitry Peskov, quoted by the Russian agencies, assures that Moscow had “prepared” upstream “for such a ceiling”. On the Ukrainian side, the chief of staff of the presidency, Andriï Iermak, estimated on Telegram that the Russian economy would be “destroyed” by this measure. This live is over.

France will deliver “additional weapons” to kyiv, according to Emmanuel Macron. Europe and the United States share a common desire, that of “continuing to help Ukraine to resist”, assured the Head of State, in an interview broadcast on Saturday on TF1. France will thus deliver “additional weapons” to kyiv, also assured the French president. “We make our manufacturers produce faster and stronger”.

Further bombardments of Ukrainian infrastructure ahead. “Necessary and inevitable.” This is how Vladimir Putin on Friday justified the bombings that have ravaged Ukraine’s energy infrastructure, leaving millions of civilians in the dark and cold.

The German Chancellor calls for the withdrawal of Russian troops. During their telephone conversation on Friday, Olaf Scholz asked Russian President Vladimir Putin to withdraw his troops from Ukraine to reach a “diplomatic solution”.

Today News Post - December 15, 2022 0
This French and American-made machine, which will be put into orbit on Thursday, will increase the definition of images tenfold and provide a large...

Diego Maradona: visit to the small museum dedicated to the cult of the Argentine footballer in a popular district of Naples