The group renounces civil disobedience actions to organize a large demonstration against the inaction of the British government in April. 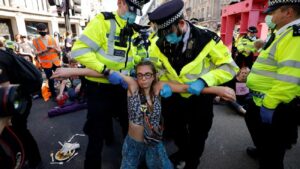 Truce of civil disobedience. The environmental organization Extinction Rebellion announced on Sunday January 1 to suspend the spectacular blocking operations in the United Kingdom that made it known. Instead, activists prefer to mobilize for a large demonstration against the government’s inaction in April. “We stop!”, They declared on Twitter, presenting their decision as a good resolution for the year 2023.

This network of activists, formed in the UK in 2018, regularly uses civil disobedience to denounce what it calls government inaction on climate change. Its activists have distinguished themselves by sticking to the roads or planes to block traffic.

Our #NewYearsResolution is to halt our tactics of public disruption. Instead, we call on everyone to help us disrupt our corrupt government.#ChooseYourFuture & join us: 21 April, Parliament. pic.twitter.com/FZlCeaHj4F

“We prioritize participation over arrests”

At the end of August, they again blocked London’s iconic Tower Bridge Weighbridge. “This year, we are prioritizing participation over arrests, outreach over roadblocks,” the group said in a statement. He announces that he has taken for 2023 the “controversial resolution to temporarily turn away from disturbances of the public space as a main tactic”.

He recognizes “the power of disturbances to sound the alarm” but says “necessary” to evolve and above all want to “disturb the abuse of power” by putting pressure on the political class to put an end to the use of fossil fuels. For this, he calls for a large demonstration on April 21 in front of the British Parliament, hoping to bring together 100,000 people.

Today News Post - January 2, 2023 0
Five years ago, Thibaud Cheminant left his life in Paris to organize safaris in South Africa. This animal lover aims to pass on his...

Death of Benedict XVI: in Bavaria, the inhabitants remember “one of them” and try to forget the controversies