Russia and Ukraine are in a battle of numbers after a Ukrainian strike in Makiivka, near the separatist city of Donetsk. Moscow announces 63 dead but for kyiv there have been at least six times more. 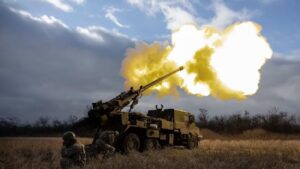 The Kremlin acknowledged the loss of 63 soldiers in a Ukrainian strike near Donetsk. The Ukrainians estimate that 400 Russian soldiers lost their lives. According to Cedric Mas, the real number of casualties in this strike will only be known “well after the end of the war, when military historians will be able to look into the testimonies and the archives”, because of the strategic stake this kind of information.

The recognition by the Kremlin of the loss of 63 of its soldiers in a single attack is a first. How to explain this communication from Moscow?

Cedric Mas: It is simply explained by the impossibility of denying the reality of these strikes since they occurred in the suburbs of Donetsk, in an urbanized area, and the two-storey building is completely razed. They also recognized this because in this informational struggle, the Russians, until then, suffered from a credibility problem: they refused to recognize the loss of a cruiser, they had presented the evacuation of the islet of Snake as a sign of goodwill… So, in order to regain credibility, it is sometimes worth recognizing losses, especially when they are absolutely impossible to dispute.

Moscow recognizes 63 dead, Ukraine speaks of 400 deaths. How do you know who is telling the truth?

We won’t know until well after the war is over, when military historians can look to testimonies and archives. That is to say, often a few decades after the end of the fighting. The exact figure of the losses is all the more difficult to pin down as it is a crucial issue to know what the exact losses suffered by the enemy are. If the Ukrainians have used up their reserves there, they will no longer be able to attack. If it is the Russians who have lost much more strength, they will no longer be able to face the next counter-offensive that everyone expects for this winter. So the issue of losses is very important and it is very difficult to know where the exact number of dead is, in addition to the fact that some wounded may unfortunately die of their injuries if they are not treated quickly enough.

How do you explain that the Ukrainians can hit the Russian forces so hard?

Quite simply because they have benefited, since the end of June, from deliveries of these Himars, multiple rocket launcher systems, which fire guided projectiles. So they are able to strike 70 or 80 kilometers from the starting point, with an accuracy of the order of a few meters, which is exceptional and which makes it possible to compensate by the accuracy of the shots for the low number of pieces that are in line. today and which are delivered in dribs and drabs by Americans and Westerners.

Domestically, for Moscow, will the acknowledgment of these new losses do much harm? How can these losses be justified to the public today?

A lot of harm or, on the contrary, reinforce the narrative of the Kremlin’s propaganda which is to explain that we are in a war that requires suffering and that the intrinsic superiority of the Russians is precisely to be able to endure deaths, that Westerners too weak and decadent could not endure. So it can come to reinforce on the contrary this heroic and sacrificial speech according to which the Russians will win by their stubbornness and their patience. In the words of Representative Peskov, a Kremlin spokesman. They will inevitably win through their patience, no matter how many deaths they may suffer by then. This reinforces this heroic discourse which is already based on the Great Patriotic War where the Soviet Union had endured millions of deaths before it could arrive in the ruins of Berlin [in 1945].

Today News Post - January 3, 2023 0
According to the Royal College of Emergency Medicine, between 300 and 500 patients die each week due to deficiencies in the UK emergency care...