UK inflation hovered around 11% in October, prompting workers to demonstrate to demand a pay rise. 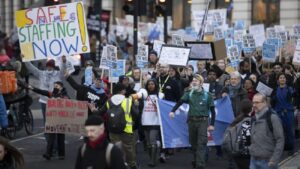 Two years ago, the United Kingdom and the European Union ratified their divorce. Since then, the lights of the British economy have turned red. Gross domestic product fell by 0.2% in the third quarter of 2022 and inflation stood at 10.7% year on year in November (it had risen to 11.1% in October, an all-time high). seen since 1981). Railways, health services, mail … Strikes have paralyzed several sectors for months, to demand a rise in wages in response to this crisis. If the war in Ukraine is partly responsible for the increase in prices, and therefore for the mobilization, to what extent did Brexit play a role in triggering these unprecedented social movements?

“There were not the expected fallout from Brexit”, immediately sums up Thibaud Harrois, lecturer in British civilization at the Sorbonne Nouvelle. This is particularly the case in the health sector. “During his pro-Brexit campaign, former Prime Minister Boris Johnson promised to reinvest the so-called 350 million euros sent each week to Brussels in the British health system, recalls the specialist. But since then, he has not there have never been massive investments.”

A shortage of caregivers partly caused by Brexit

As a result, nurses and nurses planted their strike picket on December 15 and 20, to obtain an increase in their income. An unprecedented mobilization in 106 years of existence of their union, the Royal College of Nursing (RCN). The paramedics also walked out on December 21, with the same demands. In response, the Conservative government closed the door to any discussion and deemed the requests for increases “unaffordable”. An envelope of 3.8 billion additional euros has however been allocated to the National Health Service (NHS), British Social Security, for 2023 and 2024. 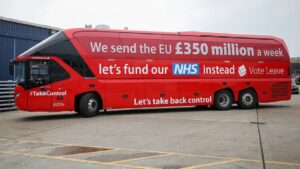 This does not prevent British health professionals from sounding the alarm over the deterioration of their working conditions, which has reached a climax during the health crisis. They denounce a shortage of caregivers, partly caused by Brexit. A study by the think tank Nuffield Trust, commissioned by The Guardian, estimates, via projections, that several thousand doctors living in the European Economic Area (EEA) may have given up settling in the United Kingdom between 2016 and 2021. Also, the Nursing and Midwifery Council register, which lists the number of nurses working in the UK, shows that the country welcomed more than 9,000 nurses from the EEA in 2015-2016 . Subsequently, after the referendum, the number of new arrivals only reached a few hundred, as illustrated in a graph by the Statista site.

“Caregivers have to work a lot of overtime to compensate for the lack of staff, with no increase in wages that follows.”

But these strikes extend well beyond the health sector. The British post office and the railway workers of the Network Rail network joined the protest movement at the end of the year. Hit hard by the rise in the cost of living, all are asking for salary increases. And Brexit is, again, in question. “Many factors come into play”, such as the surge in energy prices since the Russian invasion of Ukraine, but “the increase in regulatory and administrative barriers” in trade with the EU contributes to the surge in prices, underlines a study by the Center for the Study of Economic Performance at the London School of Economics. The exit of the United Kingdom from the Union has thus led to a rise in food prices of 6%, reports the document.

Inflation is common to all Western countries, shaken by the energy crisis linked to the war in Ukraine. But unlike its neighbours, “the United Kingdom no longer benefits from the European protection mechanism”, specifies Thibaud Harrois. At the end of December, the 27 for example approved a mechanism making it possible to cap wholesale gas prices as soon as they exceed 180 euros/MWh for three consecutive days.

A social protest initiated during the 2008 crisis

If the elements are there to see the emergence of social movements, the protest has been going on for almost 15 years in the United Kingdom, analyzes Marc Lenormand, lecturer in English studies at Paul-Valéry University in Montpellier. “After the financial crisis of 2008, wages fell sharply in the private and public sectors due to budgetary austerity policies led by the conservative parties,” he explains.

According to the nurses’ union, these measures resulted in a 20% drop in their purchasing power, AFP recalled in mid-December. The mobilized workers are therefore demanding a wage increase of just over 19%. “In the 2010s, we talked a lot about national identity and the British exit from the EU, explains Marc Lenormand. Now that it no longer arises, we come back to the social question and the role that the State must play in the economy.”

For his part, the new British Prime Minister, Rishi Sunak, seems to be following the conservative line adopted in the 1980s by Margaret Thatcher, who had shown herself to be firm against the unions as soon as she came to power, just after the winter strikes. 1978-1979. “This strategy may have worked in the past, but now the wave of strikes is surprisingly popular with the British population,” warns Marc Lenormand. According to a YouGov poll published on December 20, two-thirds of Britons polled support strikes by nurses, 63% by paramedics.

Today News Post - September 26, 2022 0
You really don't want to find something like that in the holiday apartment It sounds like a nightmare: you're having fun on vacation and then...