Former Pope Benedict XVI was German and lived for several years in Regensburg. The Catholics of the city wanted to pay homage to him on the evening of his death. 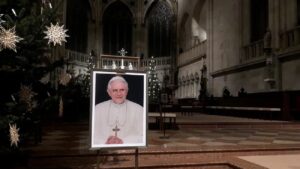 The portrait of Benedict XVI in St. Peter’s Cathedral in Regensburg, Germany, in December 2022. (AFP)

Pope Benedict XVI died on Saturday December 31 at the age of 95. Joseph Ratzinger, his birth name, was German and in his native Bavaria, his disappearance arouses a wave of emotion among Catholics. In particular in Regensburg, a medieval city of 150,000 inhabitants where he taught theology for eight years in the 1970s.

In the city’s cathedral, the portrait of Benedict XVI has been placed next to the altar, near the Christmas tree. In recent years, the visits of the former sovereign pontiff to Regensburg have become rarer. But even exiled to Rome, Benedict XVI never forgot his roots: “At each of his visits, the city was full of people, assures Georg, 59. We knew where he was staying, we watched for the lights. We were proud that someone from Regensburg takes on these responsibilities.”

“He was the first German pope for 500 years. He deserved it with his experience, background and expertise. He was one of us and it’s a loss.”

For the religious service celebrated on the evening of December 31, a few hours after the death of Benedict XVI, Saint Peter’s Cathedral in Regensburg is full. But emotion does not dissipate Petra’s bitterness. This 56-year-old teacher criticizes the former sovereign pontiff for his indifference to cases of pedophilia. “He remained too silent and put the dust under the rug, it’s not fair, slice this 56-year-old teacher, who believes that the Catholic Church should question itself.

“The worst is for those who have been abused and not listened to. Today, the Church and the Pope no longer mean anything to young people. That does not surprise me.”

The child of the country above all

Most locals prefer to forget the controversies that plagued the pontificate of Benedict XVI. It celebrates the renowned theologian, the Bavarian, who became the 265th pope in history, a major figure in the Catholic Church, as Chancellor Olaf Schulz wrote in his tribute. Sonia also salutes the courage of Benedict XVI, who resigned in 2013, to the surprise of the whole world. “Nobody expected it, it was unheard of. It surprised me, but I find it good,” she judges.

“A pope must be in good health to travel the world and meet people. If he no longer has the strength, why couldn’t he retire?”

The flags of public buildings in Regensburg were lowered for three days, as in the whole region. Bavaria mourns the country’s child.

Today News Post - October 26, 2022 0
As in several French cities, Rouen has established a low-emissions zone excluding the most polluting vehicles. This measure does not seem to everyone's taste...