This is the main concern of Americans, but in their campaign in recent weeks, the Democrats have put less emphasis on rising prices than their Republican opponents. They are now trying to catch up. 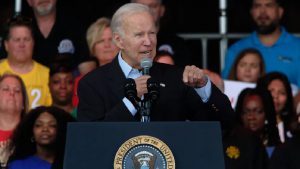 Inflation is at its highest for 40 years in the United States: the price of a gallon of gasoline still costs around 3.80 dollars, it rose to more than 5 dollars before the summer. The price of meat, eggs, milk have increased by 15 to 30%. By all polls, as the midterm elections approach, Americans want more attention paid to their pocketbooks than to abortion rights, immigration, climate change or even crime.

President Joe Biden is now fully aware of this, according to Brian Dees, the director of the National Economic Council attached to the president. “We are currently making real progress in terms of the economy, he says. We have seen it grow by 2.6% in the last quarter.

“So what the president is trying to point out, the choice that’s clear, is that these policies are all about cost reduction and lower prices for American families,” Brian Dees said.

A major question for only three in ten Democratic voters

On the side of the candidates, the same reversal in the discourse for a few weeks: abortion and crime have almost disappeared, replaced by inflation. Example with Democratic candidate for governor of Pennsylvania, Josh Shapiro, interviewed on CNN. “Reducing costs for Pennsylvania families, I addressed the issue several months ago and presented a concrete plan to reduce costs for Pennsylvanians. This problem may not be from Pennsylvania, analyzes the candidate. But I think we need to address it here and I’m the only candidate to come up with a plan to get there. What they [Pennsylvanians] need right now is more money in their pocket. If we want to drive economic growth here, we need to cut taxes and raise wages. That’s what I’m focusing on.”

Seven in ten Republican voters see the economy as the top issue in the midterm elections. Against barely three out of ten Democrats.

Today News Post - September 25, 2022 0
Turmeric really is a miracle cure In Germany, turmeric is still a relatively unknown food, which is a shame, because if there is one product...