The former boss of the FTX platform has pleaded not guilty to the eight counts brought against him. He is suspected of having used funds deposited by customers on the platform to carry out speculative financial transactions. 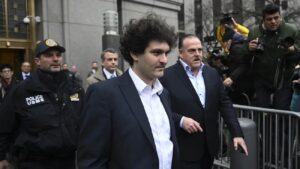 The co-founder and former boss of the FTX cryptocurrency trading platform, Sam Bankman-Fried, pleaded not guilty on Tuesday (January 3rd) to the eight counts brought against him, in federal court in New York. Indicted in particular for fraud and criminal association, “SBF”, his nickname, had been extradited at the end of December from the Bahamas, where the headquarters of FTX was located, then released on his arrival in New York, on a bail of 250 million. of dollars.

At the hearing, the trader and entrepreneur, in a dark suit and tie, did not speak and let his lawyer Mark Cohen speak on his behalf. Sam Bankman-Fried’s strategy differs from that of a former FTX executive, Gary Wang, who pleaded guilty last month and is working with authorities, as does Caroline Ellison, a former head of sister platform Alameda Research. from FTX.

Sam Bankman-Fried is suspected of having used, with collaborators, funds deposited by clients on the FTX platform to carry out speculative financial transactions through Alameda Research. In addition to risky transactions via Alameda, he is also suspected of having invested part of this money in real estate in the Bahamas and of having made donations to Democratic political figures, including Joe Biden during his presidential campaign.

Federal judge Lewis Kaplan has set October 2 as the start date for the trial of the man who was once credited with a fortune estimated at 26 billion, but lost everything in the bankruptcy of FTX and Alameda. Five of the eight counts against Sam Bankman-Fried each provide for a maximum sentence of twenty years in prison.

2022 World Cup: Morocco signs a new feat against Portugal and qualifies for the semi-finals