The favorite, Kevin McCarthy, collected only 203 votes out of the 218 necessary. The Republican Party is torn between a moderate wing and a Trumpist fringe. 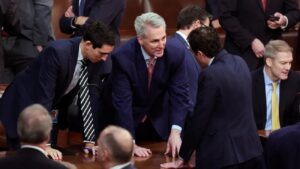 Kevin McCarthy (in the center) in full discussion in the House of Representatives, January 3, 2023, in Washington (United States). (GETTY IMAGES NORTH AMERICA)

Failure. In the United States, the elected members of the House of Representatives failed on Tuesday, January 3, to elect a president in the first round after the failure of Republican Kevin McCarthy, a first in 100 years. Big favorite to replace Nancy Pelosi, the 50-year-old was unable to calm the revolt emanating from a group of Trumpists who did not consider him conservative enough. This is a new illustration of the dissensions within the opposition party to Joe Biden.

The representatives of the Chamber therefore ended the day without managing to elect its new president. They will continue to vote until a “speaker” is elected. The Republicans, who seized the majority in the lower house in the November elections, have promised to use their new counter-power by opening a series of investigations into the American president, centered for example on his management of the pandemic. But before launching such hostilities, they must at all costs agree to elect the speaker of the House of Representatives.

The revolt of elected Trumpists

The election of the “speaker”, the third most important figure in American politics after the president and the vice-president, requires a majority of 218 votes. In the first round, Kevin McCarthy, a member of the Republican staff for more than ten years, collected only 203, 19 elected Trumpists having decided to play the spoilsports. “Kevin doesn’t believe in anything, he has no ideology,” tackled Matt Gaetz, a turbulent elected official from Florida.

Kevin McCarthy’s candidacy is however widely supported within his party: the announcement of his nomination Tuesday in the hemicycle was received by a great standing ovation in the Republican ranks. But the elected representative from California is weakened by the poor performance of the Republicans in the midterm elections. Electing a Speaker of the House of Representatives could be a matter of hours…or weeks. In 1856, the elected members of Congress only agreed after two months and 133 votes.

Kevin McCarthy seems to want to give pledges to this conservative fringe to prevent the story from stuttering. In 2015, he had already narrowly failed to become Speaker of the House of Representatives in the face of a revolt from the right wing of the party. But he also can’t afford to go overboard and alienate moderate Republicans. Although its room for maneuver is reduced, it currently has no credible competitor. Only the name of the group leader, Steve Scalise, circulates as a possible alternative, without his chances seeming serious.

Today News Post - January 13, 2023 0
Exhibition on world tour at La Villette in Paris from April 7, "Ramses and the gold of the Pharaohs" will be enriched by the...