Nancy Pelosi’s husband, Paul Pelosi, was attacked at his home on the night of Thursday October 27 to Friday October 28. The man, armed with a hammer, was obviously trying to attack the speaker of the United States House of Representatives. 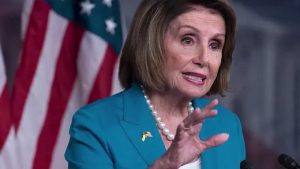 A man entered the Pelosi home in San Francisco (United States) on the night of Thursday October 27 to Friday October 28. Nancy Pelosi, Speaker of the United States House of Representatives, was in Washington, United States, but her husband was present. The man attacked him. “Our officers saw Mr. Pelosi and the suspect each with one hand on the same hammer. The suspect pulled the hammer away from Mr. Pelosi and violently assaulted him with it. Our officers immediately tackled the suspect, disarmed him and took him into custody,” said San Francisco Police Chief William Scott.

Paul Pelosi injured in the skull and arm

The suspect multiplied conspiratorial posts on social networks. This is not the first time that Nancy Pelosi has been the target of conspirators. When storming the Capitol in 2021, the crowd was looking for the Democrat close to Joe Biden.
The attack comes ten days before the mid-term elections where she is a candidate. Joe Biden condemned the attack, calling it “despicable”. Paul Pelosi is injured in the skull and arm, but his life is not in danger. According to Capitol Police, threats against members of Congress have more than doubled since 2017, the year of Donald Trump inauguration.

Today News Post - September 25, 2022 0
Would you like to shed a few kilos? Then you should not only change your eating habits, but also pay attention to what...