The Americans notably elected their first openly lesbian governor as well as the first member of the House of Representatives from “Generation Z”. 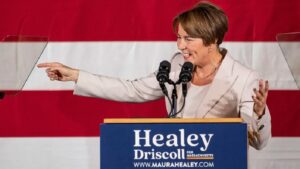 They and they are the faces of the renewal of the American political class. First lesbian woman elected governor, first member of “Generation Z” to enter the House of Representatives… Politicians with an unprecedented profile were elected for the first time during the American mid-term elections, presents four faces to know. 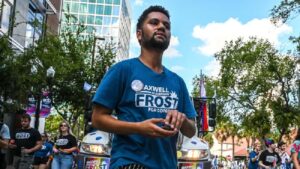 Maxwell Frost, elected Democrat to the US House of Representatives, is campaigning on October 15, 2022 at the Orlando Pride March in Florida (USA).

This 25-year-old Democrat on Tuesday became the first member of “gen Z” (those born between 1997 and 2010) to enter the United States Congress, winning a seat in the House of Representatives in Orlando (Florida). The young African-American, raised by an adoptive mother of Cuban origin, will stand out among the white faces and gray hair that populate the American Parliament. In the lower house, the average age is 58 years. “We need this representation in Congress, to have a governance that resembles the country and knows what it is going through,” he told AFP in October.

Positioned on the left of the Democratic Party, Maxwell Frost has campaigned on issues related to social justice and global warming. Marked by the shooting at Sandy Hook Elementary School in Connecticut in 2012, he is very committed to the issue of firearms legislation, reports the Guardian*. Proof of the symbol of his election, the new representative even received a call from Joe Biden after his victory, reports the British daily.

The 51-year-old Democrat was overwhelmingly elected to lead Massachusetts, becoming the country’s first openly lesbian governor and the first woman to lead the state. “I hope tonight shows you that you can be anything you want, she said during her victory speech. Tonight we did something historic.”

A lawyer specializing in civil rights, she led the battle in 2009 against a federal law authorizing the non-recognition of same-sex couples in states that wanted it, says NBC News *. She was then elected Attorney General of Massachusetts in 2014, ahead of the first openly lesbian woman to hold that position in the country.

The Democrat’s victory may hide another. Tina Kotek, in the running for the same position in Oregon and also openly lesbian, could well join Maura Healey in this historic first time, if the partial results are to be believed.

3 John Fetterman, colossus in a sweatshirt who becomes a key state senator from Pennsylvania 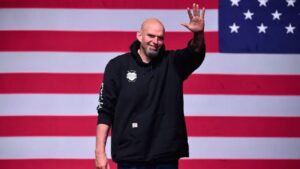 The 53-year-old Democrat with an atypical look, frequently appearing decked out in a hooded sweatshirt, managed the feat of winning the senator seat in Pennsylvania against Mehmet Oz, despite unfavorable polls. His campaign had been hampered by his stroke and by questions about his leadership abilities. Above all, he had lost points in the polls after a television interview during which he had used a teleprompter to read the questions put to him because of hearing problems, reports the New York Times *.

A native of Pennsylvania, the colossus with a shaved head was mayor from 2006 to 2019 of Braddock, a former industrial city that fell into disrepair with the decline in steel production. This social progressive, who had been called “the coolest mayor in the country” by the Guardian *, had tried to revive the locality with aid programs for young people and green spaces. 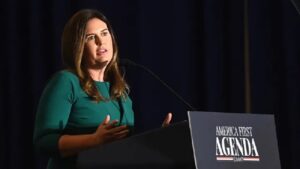 The former spokesperson for Donald Trump at the White House, during a speech in Washington (United States), July 26, 2022.

Former Donald Trump White House spokeswoman Sarah Huckabee Sanders was elected governor of Arkansas on Tuesday. She was the big favorite in this southern state, governed by her father, Mike Huckabee, from 1996 to 2007. The 40-year-old, very right, lambasted President Joe Biden and his “radical left” policies during his campaign. referring to galloping inflation, “open borders” and “rising violent crime”.

Well known to residents of Arkansas, she had held many positions in her father’s election campaigns, says Politico*. She had even been cited in Time magazine’s list of 40 personalities under 40 to follow in 2010. With her large victory, she became the first woman, and daughter of a former governor, to govern Arkansas. And asserts itself as a voice that will count within the Republican Party.

Today News Post - October 31, 2022 0
Russia allows the use of nuclear weapons to repel the Ukrainian counter-offensive led in the region of Kherson, in the south-east of the country....