This “cyclonic bomb”, accompanied by freezing temperatures, caused heavy snowfall in the northeast of the country. 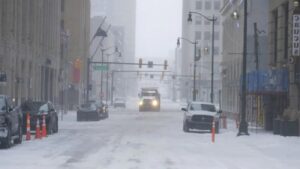 A historic winter storm, accompanied by freezing temperatures, continues to disrupt the Christmas weekend in the United States. It caused the cancellation of thousands of flights and caused the death of at least 22 people in eight states, according to a latest report from the authorities established on Sunday, December 25. Some 160,000 homes were still without power, Sunday at 6 p.m. (Paris time), especially in Maine, said the Poweroutage site.

The US National Weather Service (NWS) has warned that the cold poses a deadly risk and urged Americans in affected areas not to leave their homes. The temperature felt as low as -48°C in some areas on Friday, due to the wind. Some of the 22 deaths recorded occurred on the roads, which have become very dangerous. Four people have died in Ohio in crashes related to the storm, Gov. Mike DeWine said.

The governor of hard-hit New York State has deployed the National Guard to Erie County and Buffalo. In this city located near the border with Canada, the emergency services are almost paralyzed, according to the authorities. In other cities such as Denver (Colorado) or Chicago (Illinois), shelters have been opened to accommodate people in need, in order to protect them from the risk of hypothermia.

Due to the very low temperatures, the pressure on the American power grid is also extremely high. Some cities, notably in North Carolina, had to temporarily cut power due to high electricity demand, leaving homes without heat. The electricity operator of a dozen states in the north-east of the country, PJM, called on the population to reduce their consumption throughout the day on Saturday, in order to avoid cuts.

Today News Post - December 14, 2022 0
A few days before the end of the year celebrations, the 13 Heures continues to make you discover the places where the Christmas spirit...