The winter storm has already killed 22 people in the United States. The cold weather continued to disrupt the Christmas weekend in the country, prompting the cancellation of thousands of flights. Several governors have declared states of emergency. 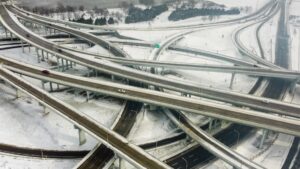 A “cyclonic bomb”. Here is how the phenomenon that has shaken North America in recent days, especially the United States, is described. This winter storm described as “historic” has already caused the death of at least 22 people in eight states of the country, according to the latest report from the American authorities established on Sunday, December 25. The temperature felt sometimes dropped below -40°C, and some 160,000 homes were still without electricity on Sunday at 6 pm.

The snow was invited to the end of the year festivities starting with the State of Washington, in the northwest of the country, before falling en masse in several other states. Storm Elliot then hit a wide area stretching from Texas to Quebec, and millions of Americans soon found themselves facing a thick white blanket. More than a meter of snow fell in the space of a few hours, especially in upstate New York, forcing residents of the area to remain confined to their homes.

About 160,000 American homes were still without power late Sunday afternoon (compared to 500,000 Saturday evening and up to 1.5 million Friday), according to the Poweroutage.us site, especially in Maine, where temperatures were largely negative.

A fierce blizzard in the northeast of the country

American meteorologists had predicted extreme conditions to come on the northeastern fringe of the United States. It was confirmed: a combination of freezing wind and polar temperatures caused a wave of “deadly cold”. After declaring a state of emergency on Friday, New York State Governor Kathy Hochul deployed the National Guard to Erie County and Buffalo.

On Twitter, meteorologist and storm chaser Reed Timmer shared impressive footage from downtown Buffalo, showing police vehicles trapped in the snow. The strong winds also got the better of some electric poles in the city, plunging many neighborhoods into darkness. To give an idea of the magnitude of the phenomenon, the Buffalo Weather Service published photos of the snowdrifts observed on the streets, next to one of their employees who is about 1.80 m tall.

Now that the heart of the lake effect band has shifted north of the area a bit and visibilities have improved to a whopping 1/8th of a mile, we can finally get a better look at some snow drifts outside the office.

For reference, our Observation Program Leader is 6ft tall. pic.twitter.com/NAPFONZpiB

Other astonishing scenes have been immortalized, still in the city of Buffalo, such as this house on the shores of Lake Erie, frozen in ice and covered with stalactites more than a meter long. Sunday morning, blizzard warnings were still in progress in ten counties in New York State.

🚨#BREAKING: Wild scene from Buffalo as homes are fully covered in ice

Jaw dropping video shows houses covered in ice homes near the water were encased in ice and dripping with icicles from Powerful winds and strong waves from Lake Erie pic.twitter.com/q9GFeEhE6u

A temperature of -47°C felt in places

The US National Weather Service (NWS) warned that the cold posed a deadly risk and urged Americans in affected areas to stay indoors. Due to the wind, the temperature felt on Friday and Saturday dropped to -41°C in South Dakota and up to -47°C in the state of Wisconsin, the agency reported on its website. .

I mean seriously, this is absolutely incredible. Another drone video hyperlapse from Drew Hollinger in Bigfork #MTwx #ArcticBlast pic.twitter.com/u2ltQLt5V9

Differences in water and air temperatures have generated intense fog patches across the country, such as around Bigfork Lake, Montana. But the cold mainly caused freezing rain which made thousands of kilometers of roads impassable, while nearly 102 million Americans were expected on the roads between December 23 and January 2 for the holiday season. , according to an estimate by the American Automobile Association. Some, like this motorist from the State of Virginia, did not hesitate to pull out a hammer to defrost their vehicle.

The cold has also caused a curious phenomenon in Florida: iguanas falling unconscious. Usually perched on tree branches, these reptiles fall into a kind of lethargy if the temperatures are too low, and thus end up on the ground, sometimes causing power cuts if they fall on electrical cables. Fortunately for these animals, this coma is only temporary, and normally ends when the temperature rises.

Today News Post - September 26, 2022 0
Just know how. Unfortunately, not all of us are blessed with full hair and long eyelashes. A few tricks can work wonders. With this great...