A week after the withdrawal of Russian troops, the railway line between kyiv and Kherson resumed service on Friday, November 18. 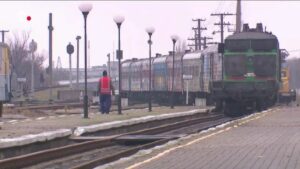 A week after the end of the Russian occupation, the railway line between Kyiv (Ukraine) and Kherson (Ukraine) was restored. 200 passengers left the capital on Friday 18. On the quay, Sveltana finds, in tears, her granddaughter, a student. “We’ve been waiting for this moment for eight months. She lived under the occupation, she was very brave,” she said. “I haven’t cried for a very long time, and that’s it, I cry when I see [my daughter]”, confides for his part a man.

“We are so happy”

If the city of Kherson is still deprived of electricity and water, the inhabitants are savoring their newfound freedom. “We weren’t expecting it anymore, we are so happy,” says a man, who has returned to his home. “I haven’t felt this good in the last nine months,” added another. The authorities have put on sale tickets for a train between kyiv and Sevastopol, in Crimea.

Today News Post - December 3, 2022 0
The 20 Hours of Friday, December 2 goes around the world news in pictures. In summary, the protest that does not weaken in Iran...