For its part, the Ukrainian army mentioned the figure of 400 Russian soldiers killed. 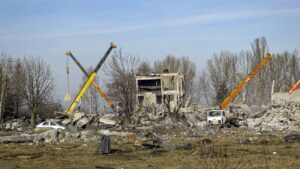 The rubble of the garrison building hit by Ukraine on January 3, 2023 in Makiivka (Ukraine). (AP / SIPA)

These are the heaviest losses in a single attack admitted by Russia since the start of the invasion in February. At least 89 Russian soldiers were killed on Saturday, December 31, in a Ukrainian strike on Makiivka, a city under Russian occupation located east of the separatist city of Donetsk.

A strike on a garrison building

Missiles were fired in the middle of the night from Himars systems, rocket launchers supplied by the United States to Ukrainian forces, and hit “a temporary deployment center” of the Russian army, according to the Russian Defense Ministry in Makivka. Moscow specifies on Telegram that six missiles were launched and that two were intercepted by its air defense. On the same social network, Igor Strelkov, a former pro-Russian separatist commander very familiar with the situation, claims that an ammunition depot was in the same building. These munitions would have exploded, increasing the human toll of the attack. An analysis shared by the British Ministry of Defense.

Before/after photos of the school building in Makiivka where Russia had stationed mobilized troops from the Saratov region, Russian telegram channels report. At midnight on NY, Ukraine destroyed the building – killing an unknown number of Russian troops – with a volley or HIMARs. pic.twitter.com/44ZL1HigQ8

On Monday evening, the General Staff of the Armed Forces of Ukraine said that its forces were behind the strikes on this city. Himars are the most sophisticated artillery system supplied to Ukraine by Western countries. They can launch satellite-guided missiles up to 80 km away with the ammunition delivered to the Ukrainian army. On Wednesday morning on Telegram, Russia claimed to have destroyed the launcher used in the attack, without providing visual evidence.

Moscow now reports 89 dead, after initially giving the figure of 63 victims. The deputy commander of the regiment, Lieutenant-Colonel Bachourin, is among the victims.

The communication of the Ukrainian army advanced the figure of 400 soldiers killed, but the general staff was content to give a material assessment, evoking 10 units of equipment destroyed. Former paramilitary Igor Strelkov deplores “hundreds of dead”, while a pro-war blogger speaks of “216 survivors” on Telegram. None of these reports could be independently verified.

On social media, some have accused Russian authorities of downplaying the death toll. “My god, who is going to believe the figure of 63 [the first report released]? The building was completely destroyed,” wrote a Russian, Nina Vernykh, on VKontakte, the main Russian social network.

Strong criticism against the command and the behavior of the soldiers

This new setback triggered a shower of criticism on the Russian army, accused of not learning from its past mistakes. He is notably accused of having massed troops in a single building, next to an ammunition depot, and of having authorized them to use their mobile phones, the signals of which were able to help the Ukrainian army to locate them. In a statement published on Telegram, Lieutenant General Sergey Sevrioukov justifies the scale of the toll by this use of telephones: “It is now clear that the main reason [for this attack] is, despite the ban, the ignition and heavy use of cell phones in an area within range of enemy strikes.”

“Ten months after the start of the war, it is dangerous and criminal to regard the enemy as a fool who sees nothing,” said Andrey Medvedev, deputy speaker of the Moscow city legislature. “The enemy has inflicted on us the most serious defeat in this war, not thanks to his talent, but because of our mistakes”, judged on Telegram Daniil Bezsonov, a spokesman for the pro-Russian regime based in Donetsk. by Moscow. In Samara, where many of the victims came from, a rally in their memory was organized, a rare event of public mourning since the beginning of the conflict.

Moscow says the toll from a Ukrainian New Year strike in Makiivka has risen to 89.

Russians gather in Samara Oblast to mourn the loss of the troops in a rare public display of anger and griefhttps://t.co/xxqS5zp9Iy pic.twitter.com/z5w0ZV21mV

Today News Post - October 31, 2022 0
In Madrid, the Prado Museum is embarking on a "transparency operation". He wants to draw up a list of his works of art looted...