Some 200 Ukrainian police were deployed in Kherson to clear mines and document “crimes” attributable to Russian forces, a day after the city was liberated. 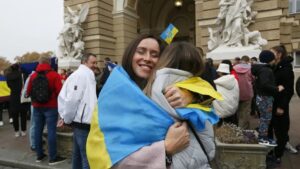 Residents of Kherson temporarily living in Odessa (Ukraine), during the Russian occupation, celebrate the liberation of their hometown, November 12, 2022. (AFP)

The day after the liberation of Kherson, in the south of Ukraine, the police were on site to clear mines and document possible crimes attributable to Russia, Saturday, November 12. “The war continues”, affirmed the Ukrainian Minister of Foreign Affairs, earlier in the day. looks back on the day on the war front in Ukraine.

Police demine and investigate in Kherson

Some 200 police were deployed in Kherson to erect roadblocks and document “the crimes of the Russian occupiers”, announced the head of the national police, Igor Klymenko. He also alerted residents of the city to the presence of mines left by Russian forces, calling on them to “move with caution”. According to Igor Klymenko, a policeman was injured during a mine clearance operation in a building in Kherson.

“We are winning battles on the ground. But the war continues,” Ukrainian Foreign Minister Dmytro Kouleba said on Saturday at a Southeast Asia summit in Cambodia. The minister was speaking the day after the entry of Ukrainian troops into the city of Kherson, a major success for kyiv.

“I understand that everyone wants this war to end as soon as possible. We are certainly the ones who want it more than anyone, he said. But as long as the war continues, and we see Russia mobilizing more conscripts and getting more weapons to Ukraine, we will of course continue to count on your continued support.”

The Russian withdrawal from the Ukrainian city of Kherson marks “a new strategic failure” on the part of Moscow, British Defense Minister Ben Wallace said on Saturday, saying that this defeat would sow doubt in Russian public opinion. .

“The withdrawal announced by Russia from Kherson marks a new strategic failure for them. In February, Russia had failed to seize the major targets which it had set, apart from Kherson”, reacted the British minister in a statement. “Now, with (this city) also abandoned, people in Russia have to ask themselves: ‘What is all this for?'” he added. On Saturday, the United States also hailed what appears to be an “extraordinary victory” for Ukraine.

The President of the European Council, Charles Michel, encouraged China on Saturday to “use all means” to convince Russia to respect international law, a few days before the G20 summit dominated by the consequences of the conflict in Ukraine.

“We encourage the Chinese authorities to use all means at their disposal to convince Russia to respect internationally recognized borders, to respect Ukraine’s sovereignty,” the leader told AFP. Charles Michel spoke from Phnom Penh, where he met Saturday and Sunday leaders of the Association of Southeast Asian Nations (ASEAN), meeting at the summit.

Today News Post - October 29, 2022 0
Are clandestine Chinese police stations located in the heart of Paris? This is according to the NGO Saveguard Defenders. It would be a relay...