Civilians are not yet allowed to return to Kherson, the city recaptured from the Russians after their retreat. But elsewhere, the inhabitants are in the process of finding their homes, despite the immense difficulties that await them. 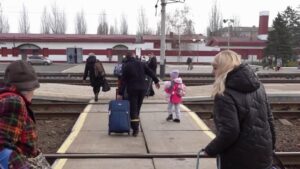 In Kramatorsk (Ukraine), a train arrives at the station. The civilians return to their homes, to the towns and hamlets recaptured from the Russians. A soldier reunites with his wife and son. Emotion is on everyone’s face. The station was bombed last April by Moscow (Russia). Valentina, 85, has just spent seven months in the shelter in the west of the country. “I’m so happy to be back home,” she says. The retreat of the Russians convinced her that she could return, regardless of the risks still present.

Another village was taken over by the Ukrainians but it was 90% destroyed. The locals still come back. In a few days, men will come to settle with their families. The village bridge is destroyed. So you have to travel by boat, but no one complains about it. Areas are littered with mines that can explode. A huge threat to civilians. “Since the beginning of this war, eight million Ukrainians have left the country. Seven million of them have already returned,” says special envoy Maryse Burgot.