The military junta in Burma is taking advantage of the celebrations of the 75th anniversary of the country’s independence to honor a radical monk, sometimes nicknamed the “Buddhist Bin Laden”. 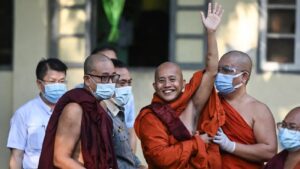 Ashin Wirathu is well known to 55 million Burmese, and to the country’s 5% of Muslims, he is the face of terror. Wirathu is 54 years old, he is an extremist Buddhist monk. And on January 4, he was awarded the title of “Thiri Panchy“, it is the highest honorary distinction in Burma. For the occasion, the military dictatorship has put the small dishes in the big ones. The ceremonial ceremony saw the head of the junta himself, General Min Aung Laing, bow to the cleric, presenting him with the honorary badge, for “outstanding contribution to the good of Burma”. Wirathu presented himself, as usual, in the bare attire of monks: barefoot, garnet robe, impassive face. But behind this apparent sobriety hides a formidable ideologue. First of all, he embodies support for the junta. He is a fervent defender of the military who overthrew the democratically elected government of Nobel Peace Prize winner Aung San Suu Kyi in February 2021. In particular, Wirathu called on his followers to “cherish the army as if it embodied Buddha”.

Behind a sober appearance, hatred of Muslims

This monk is also a theoretician of hatred against Muslims and it is for this reason that he has sometimes been nicknamed the “Buddhist bin Laden” and even the “Hitler of Burma”. Wirathu is obsessed with the threat he sees as Muslims. He regularly advocated their extermination, with in particular this formula: “They reproduce so quickly, they rape our women, they want to occupy our country”. Under the guise of religious education classes, Wirathu has largely contributed to molding minds and legitimizing the persecution of Rohingya Muslims from 2017. More than 700,000 of them have fled the country, largely to neighboring Bangladesh. Wirathu has created several movements: the 969 group, banned in 2013, the Ma Ba Tha movement, banned in turn, and more recently the Philanthropic Foundation of the Buddha Dharma. Each time, the ideology remains the same. The hate speech remains. Under the government of Aung San Suu Kyi, Wirathu was eventually arrested at the end of 2020, but he was released by the military a few months after they came to power. All charges were dropped. Since then, Wirathu has resumed his diatribes, including of course by the most modern means: social networks, the Internet, the sale of DVDs.

This situation obviously contrasts with the repression of political opponents, in particular the sentencing of Aung San Suu Kyi to a total of 33 years in prison. The multiple trials against him were completed at the end of last week. This January 4 the junta, which wants to appear magnanimous, announced the pardon of 7000 people on the occasion of the 75th anniversary of independence. But nearly 15,000 others remain behind bars. The dictatorship also took advantage of this day to perform a show of force in the streets of the capital Naypidaw: military parade with tanks and missile launchers. The power finally promises, I quote, “free and fair elections”, but it gives … no timetable for the ballot.

Today News Post - January 13, 2023 0
The energy crisis that the country is going through is likely to worsen after a record year: more than 200 days marked by power...