The Biden administration intends to reshape its relations with African countries. The recent summit on Africa in Washington is supposed to have produced the roadmap, as the academic Folashade Soule reminds us. 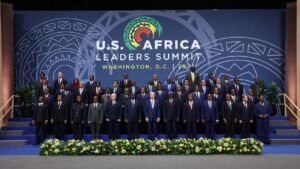 A meeting crowned with “success”, according to Moussa Faki Mahamat. The President of the Commission of the African Union welcomed, Friday, December 16 on Twitter, the outcome of the summit between the United States and Africa, in which 49 countries participated.

According to the former Prime Minister of Chad, this meeting in Washington constitutes “another strong demonstration of the Biden administration’s commitment to resetting the strategic partnership between the United States and Africa on the basis of mutual respect”. Folashade Soule, researcher in international relations at the University of Oxford (United Kingdom), sheds light on this evolution of the Americans.

What do you remember from the summit that has just been held in Washington?

Folashade Soule: It intends to demonstrate the re-engagement of the United States in Africa since the previous summit which took place under Obama in 2014. It is part of the new American strategy in Africa. And there is already a change in rhetoric: China has hardly been mentioned. We can point out the economic initiatives that mobilize the American private sector more, more diverse financing offers but also internal institutional reinforcements within the American administration through the appointment of a presidential representative for the implementation of these initiatives. (Ambassador Johnnie Carson).

At the political level, the United States supported the expansion of the G20 with a seat for the African Union, as well as a permanent seat for Africa on the UN Security Council. The ZLECA [African Continental Free Trade Area] has received more support. Africa therefore seems to be more of a priority for the United States, but it remains to be seen how well these initiatives will be executed and the impact they will have on trade relations. African products currently represent only about 1% of US imports.

Before this summit, in August, the American Secretary of State, Antony Blinken, unveiled the new African strategy of the United States. What is different from the previous ones?

During previous visits by American Secretaries of State to Africa, Democrats and Republicans alike, the discourse was particularly offensive the relations maintained by African governments with China. However, he was perceived as condescending and paternalistic on the continent, because he implied that African countries were not able to choose their partners according to their objectives. This narrative was not effective either insofar as it did not prevent African governments from pursuing their strategy of diversifying partners, particularly economic and security partners with China, Russia, but also with Turkey.

The new American strategy initiated by Blinken’s tour of Africa in 2021, although it does not hide a rivalry with China and Russia, stands out on several levels. It is now a question of a “partnership” between the United States and Africa: closer ties and closer coordination with regional institutions, in particular the African Union, stronger cooperation to combat climate change and promote a just energy transition, as well as increased financing for economic projects that are priorities for African countries, including the mobilization of private capital. The new American strategy therefore stands out from the previous ones because it now takes African priorities more into account.

Why does China remain the main threat in Africa in the eyes of Washington? Would Mali, the Central African Republic, and Burkina Faso’s recent ties with Russia pose only a “minor” threat to the Americans?

The incursion of Russia into Africa and more recently into the Sahel poses a threat to the United States, but it seems to be concentrated, for the moment, in the security domain, with the intervention of actors such as the paramilitary group Wagner . Disinformation strategies against the West, and especially France, in French-speaking African countries also constitute a threat.

In this regard, the United States is considering a bill, the “Countering Malign Russian Activities in Africa Act”, which intends to counter the activities perceived as harmful by Russia in Africa and to dissuade African countries from engaging with Moscow in various areas under threat of sanctions. This initiative has drawn criticism from several African countries, including South Africa, who see it as an obstacle to their objectives of diversifying their partners.

However, China’s engagement in Africa goes far beyond economics. It now extends into the fields of security, technology, agriculture, environment, health, media and politics. China’s offer is therefore more “integrated” and represents more worrying competition for the United States in the long term in Africa, but also on a global scale.

Concretely, what do African states gain from this “American turn”?

The partnership offer is growing for them. They now have more options on the table. In order for them to be beneficial to the development of African economies, States must however be selective and commit themselves according to a previously defined strategy.

The growing engagement of both traditional and new partners – India, Brazil, Turkey, South Korea – is a competition that can be constructive. To do this, African states must avoid zero-sum logic, replace one partnership with another for geopolitical considerations. Finally, they must structure themselves more internally in order to be able to better manage these multiple partnerships.

Today News Post - December 6, 2022 0
Monday, December 5, the trial of the Brussels attacks opened in Belgium. They had been perpetrated by the same terrorist cell as that of...

Elon Musk reinstates the accounts of several personalities banned from Twitter, but has “not yet made a decision” concerning Donald Trump