In two decades, the capital has become the 4th “power” for the production of this theatrical genre, behind New York, London and Hamburg. Tourists from Latin America, in particular, appreciate these shows in the Spanish language. 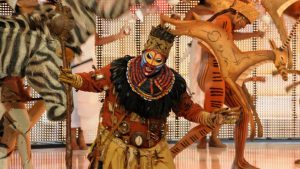 The musical The Lion King, a great success in Madrid, performed here at the Folies Bergeres theater in Paris, in 2008. Photo illustration. (CHRISTOPHE PETIT TESSON / MAXPPP)

If the musical has known an unstoppable rise in the Spanish capital for twenty years, it was not easy at first. Live performance professionals were not at all interested in this style of show combining theatre, dance, singing and sometimes even tap dancing. Gradually, they saw that the public was very receptive and they invested more and more money in this genre.

“The Lion King” in theaters for 11 years

Today we can speak of a real passion for musicals in Madrid, which translates into a multiple and varied offer, explains Jesus Cimarro, the president of the Association of Producers and Theaters of Madrid: “The sector of musicals represents at least 50% of the production of the city of Madrid this season, in medium and large halls. By the next month of July, there will be 14 musical shows, especially large formats.” . An unprecedented number of productions with lots of new releases and the great classics, such as The Lion King, on display since September 2011.

Most of the musicals will still be performed on the famous Gran Via, one of the main thoroughfares in the center of the capital, with its wide avenues, splendid buildings and Broadway tunes. Before the Covid-19 pandemic, this theatrical genre already represented 70% of the overall turnover of the Madrid region, or nearly 120 million euros, all artistic disciplines combined.

The Spanish language, “an asset”

Can Madrid hope to become the European Broadway? The march is still high even if the Madrid artists are defending themselves well. The Spanish capital is the 4th “world power” in terms of musicals, behind New York, London and Hamburg.

But that’s not all: according to Marta Rivera, the culture and tourism adviser for the Madrid region, the capital is now the undisputed world reference in the field of musicals in the Spanish language: “There are a real consolidation of what is called ‘the Latin Broadway’. It is the only place, the only city where you can see so many musicals made in Spanish. Madrid plays with an asset which is that of Spanish, a language spoken by nearly 600 million people.” ”

“There are a lot of tourists from Latin America and the musicals are one of the reasons for their visit. In this area, Madrid is unbeatable”.

Madrid sees even wider. The city’s mayor, Martinez Almeida, visited New York last September, where he spoke with representatives of Broadway to draw inspiration from them. In addition, there are already companies in the sector that are considering subtitling musicals in English, in order to attract English-speaking tourists.

Today News Post - December 1, 2022 0
The recipe that allowed the Blues to quickly qualify for the round of 16 should not be changed following the match against Tunisia on...