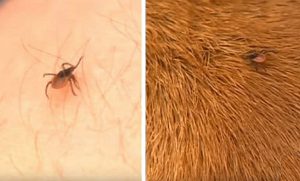 What helps against ticks? What to do if the head is still stuck?

Almost every third person in Germany is wondering: what helps against ticks! This is a very important question, because ticks should not be underestimated. It is a blood-sucking type of mite that can transmit serious diseases (such as Lyme disease). You should know these 3 things!

This reduces the risk of you and your dog being bitten by a tick.

What are ticks? Facts you should know first

Before we go into more detail about the question ‘what helps against ticks’, we would like to briefly explain what ticks actually are. As already mentioned, these are blood-sucking mites. There are around 900 species of ticks in total. Around 20 are known in Germany. The common wood tick tick is the most common species. Ticks have a powerful mouthpart with which they are able to scratch the skin of humans or animals and then poke through the wound with their proboscis. The blood that escapes is sucked up by the tick.

A suction process takes about 30 – 60 minutes. However, there are also ticks where it can even take several weeks! The body grows twentyfold due to the blood absorbed inside, now reaching a size of up to 3 centimeters. Blood clotting is prevented by the saliva secreted by the tick. Females are much larger than males!

lurkers and hunters
There are ticks that lurk on blades of grass or bushes and as soon as they are touched while passing by, they hold on. The hunters are even actively hunting, moving forward at a speed of 6-8 meters per hour.

And how can humans and their pets protect themselves?

That helps against ticks: 3 things for dogs, cats and humans

It’s not just dog owners who often walk through the woods outside who worry about ticks: what helps against ticks on dogs? Cat owners would also like answers and are looking for a remedy against ticks in cats. And people should also protect themselves sufficiently to avoid transmission of diseases such as Lyme disease.

1. Natural protection against ticks
Animals deal with tick bites much more often than we humans. We often notice this when cuddling with our four-legged friends. Suddenly we feel a lump or something like a ball. Every pet owner should have tick tweezers in the house. What basically seems to work:

Oil against ticks seems to work. Studies have shown that coconut oil can keep up to 80 percent of ticks at bay. The FU Berlin also found evidence of this. The lauric acid content in coconut oil is responsible for this. Important in the application is that the animal should be rubbed every day with a small amount on the legs and stomach. However, this could be difficult with long-haired animals.

Precautionary measure: palpation of the fur. Sounds simple, but most pet owners don’t do it! After each walk, the animal’s fur should be thoroughly examined. Actually a matter of course.

High-quality essential oils: it is important that the therapeutic grade of the oil is stated. Not just any oil will work! A good oil costs about 20-30 euros per bottle. Particularly suitable: Oregano or OnGuard. Important: before applying, be sure to test whether your pet tolerates the oil. Since good essential oil is very intense, only a few drops are needed.

2. This is what you should do if the tick hasn’t been completely removed – help, the head is still stuck!

What helps against ticks if they have bitten you? Tick ​​tweezers or tick tweezers. Even if you try hard, it can happen that something gets stuck in the wound. But did you know, it’s not actually the tick head; Ticks don’t have heads. It’s parts of the mouthparts that get stuck. Poking around in the wound with tweezers usually does not do much good, this only increases the risk of infection. Although it is always emphasized that everything of the tick should be removed in any case, it is not a catastrophe if this does not work out. Nevertheless, it is true that the risk of inflammation of the wound is now higher. It is important that you see a doctor as soon as possible to get a check-up. By the way, this is advisable in one way or another if you or your animal has been bitten by a tick!

3. Use tick tweezers correctly
Place the forceps or tweezers directly against the skin (as close as possible) and then pull out with a slight twisting motion. The tick tweezers are shaped in such a way that the body of the tick is not squeezed.

Today News Post - September 26, 2022 0
Tomato slices can replace some expensive creams! The fact that many women are now rubbing tomato slices over their faces may seem strange at first...