The Russian automotive industry has just proudly released a new vehicle… which is, in fact, nothing Russian. A way for the authorities to try to deceive, despite the economic consequences of the war in Ukraine. 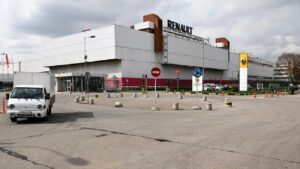 We knew the story of the “Potemkin villages”, these model villages which would have been set up from scratch under Catherine II by her minister Potemkin, so that the tsarina had only the vision of a prosperous country and did not see poverty. . Here comes the time of the “Potemkin cars”: this is how we could describe the latest born of the Russian automotive industry, the Moskvitch 3, an urban crossover that has just rolled off the lines of the former Renault factory in Moscow .

Since the start of the war, most car factories in Russia have been shut down. Foreign manufacturers are withdrawing one after the other, and certain components are no longer arriving. But the Russian government is trying somehow to support the sector. The Avtovaz factory in Togliatti, which belonged to Renault, was bought by the State and produces Ladas as best they can, without ABS, without airbags and without belt pre-tensioners. We had to change the regulations to approve this type of vehicle.

The factory that Renault had in Moscow was bought by the city, which has just relaunched the production of a vehicle in a few months, by reviving an old Soviet brand, Moskvitch (“Muscovite” in Russian). The first models have just emerged triumphantly from the assembly lines.

A car that is actually 100% Chinese

It sounds like an industrial feat, but there’s actually nothing Russian about this vehicle. The Moskvitch 3 is actually a Sehol X4, a 100% Chinese car, produced by the Chinese manufacturer JAC. It is, moreover, entirely made in China: it comes off the production lines, we disassemble a few parts, we load it all into a container, which we ship to Moscow, where Russian workers reassemble the parts. And so this car can be stamped “Сделано в России” (“Made in Russia”). But of all this the city of Moscow never speaks, even if it is an open secret.

Under the USSR, the Soviets regularly copied Western models, with or without the permission of the designers. Today, the Russian authorities no longer even bother to do so.

Today News Post - October 20, 2022 0
It is a dam of a hydroelectric power station located in the Kherson region, in southern Ukraine, and under the control of Moscow forces. Ukrainian...