A country, yet one of the most powerful on the planet, does not participate in the FIFA World Cup in Qatar: China. The Chinese dream of participating and organizing this competition one day seems far away. 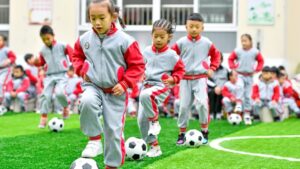 Initiation to football in a school in Huzhou (China)

We can speak of a real frustration in China on the question of football. The Chinese, when they set goals very often manage to achieve them: space conquest, development of new technologies, organization of the Olympic Games on several occasions… The Middle Kingdom displays its successes. But in football, it’s a total failure.

President Xi Jinping’s dream of making China a soccer superpower is nowhere near coming true, with a national team languishing in 79th place in the Fifa rankings and with just one appearance in a Global. That was in 2002, with 0 goals scored. Despite large investments, the use of foreign coaches, the mayonnaise does not take. Top-level football is failing to establish itself in China.

For Zhang Xiangbo, coach in a club that welcomes young people aged 10-15 in the suburbs of Beijing, Chinese football faces a double difficulty: a problem of training, but also of mentality. “There are a lot of only children here, and the parents are afraid that their child will get injured while playing football. The school is also afraid of being held responsible. All this does not promote the practice of football! Besides, , in terms of training, foreign clubs that have been around for a long time have very sophisticated talent detection systems”.

“Here it is said that if Messi had been Chinese, he probably would never have been spotted!”

As a result, some Chinese investors get bored and move their money overseas. Like for example the Chinese billionaire James Zhou who has invested in France, within the AJ Auxerre, club of which he is the owner.

The impact of the Covid-19 epidemic

The “zero Covid” policy practiced by the authorities has done great damage to Chinese football, with a championship almost under confinement. Since 2020, the first division matches have all been grouped together in three cities, very far from the spectators. China was supposed to host the Asian Football Cup next summer, but the authorities pulled out last spring. A disastrous decision in terms of image, but also financially: a brand new 70,000-seat stadium was built in Beijing to host this event, the “workers’ stadium”. The lawn was laid this week. 460 million euros spent on a competition which will therefore not take place.

Chinese football’s luck may be on the women’s side: Chinese female footballers are doing much better than the men, with eight World Cup qualifications and a third place on the podium in 1999. And these players are exporting: for example Wang Shuang, who played for PSG in 2018.

The communist regime understood the potential well. China, it has been official since this week, is preparing a bid to host the Women’s World Cup in 2031.