The Black Ferns managed the feat of beating the English favorites on Saturday in the World Cup final (34-31). 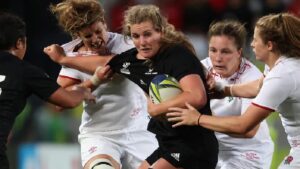 The Black Ferns managed to win after a final with many twists and turns on Saturday, November 12 at Eden Park in Auckland. Faced with the English, quickly reduced to 14, but undeniably more powerful, the New Zealanders made their courage prevail, and carried by their public, they managed to win a sixth world title against a team which nevertheless remained on a series 30 games unbeaten.

Ruby Tui’s teammates thus retain their title, won in 2017 against … England, world champion in 2014. In a high-intensity meeting, under a rain of tries (11), New Zealand and England gave a demonstration: spectacle rugby, with suspense, tension and play, delighting the more than 42,000 spectators at Eden Park.

A red card that changes everything

With unlucky kickers on both sides, Emily Scarratt on the English side and Renée Holmes on the Kiwi side, each team could only count on its most offensive players, forwards mainly for the Red Roses and backs for the Black Ferns . The latter had however suffered enormously at the start of the match, being trailing 14-0 after less than a quarter of an hour, but the red card inflicted on the Englishwoman Lydia Thomson, for a tackle in the head (18th), restored the balance.

From then on, the Black Ferns, urged by 42,500 spectators (a new record for a women’s rugby match), were able to find their binder to compete with the control of the Red Roses. Exchanging the lead throughout the second period, the New Zealanders ended up snatching victory in the final seconds, when, while they were cornered in front of their line, a diverted ball into touch sealed their success in an indescribable atmosphere.