Key rings, t-shirts, or even balls, tens of millions of items for football fans around the world are produced at the Yiwu wholesale market in southern China. After a very difficult year 2021 due to the “zero Covid” policy, manufacturers intend to take advantage of the World Cup effect. 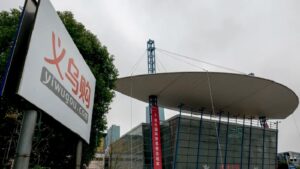 The World Cup represents, every four years, a real godsend for the Yiwu wholesale market, the temple of small goods “made in china”. Here we manufacture everything, mainly low added value items which are then exported and sold all over the world. Since April, dozens of factories have been running at full speed to manufacture more than 70% of the products derived from the FIFA World Cup in Qatar. For example, 100,000 footballs are produced every 50 days in the largest factory in the sector.

Most of the goods have already been sent around the world, but the exporting companies are preparing to resume a new round of production for the final stages of the world. “We have sent large quantities of goods, says Ye Temu, director of one of the factories manufacturing key rings. By the end of the World Cup, we will still have additional orders depending on the teams that are going. qualify. We have extended the working hours of our workers: every day from 6 a.m. to 8 p.m.

“Thanks to the World Cup, our sales and our production volumes are much higher compared to 2021. It makes up for a year that has been miserable.”

A miserable year from an economic point of view due to China’s “zero Covid” policy, which weighed heavily on factory activity. Thanks to the World Cup, the turnover for Yiwu traders will finally be very comfortable, estimated according to a customs figure at least 536 million euros, just for sporting goods.

Today News Post - October 26, 2022 0
Present in Rome, Sunday October 23, Emmanuel Macron must speak within the framework of an international forum for peace against the backdrop of the...