The organization of this World Cup in Qatar has caused a lot of ink to flow. Critics and controversies have not shaken the peninsula, which was betting on its soft power to make the country a player on the international scene, without any naivety. 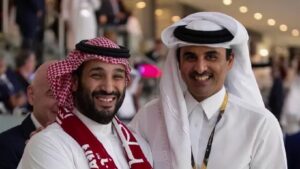 Qatar had a month to restore its image by hosting one of the biggest events in the world in the desert. Wouldn’t Qatar be the second winner of this World Cup? With easily accessible stadiums, a good-natured atmosphere without overflow, this edition is one of the most successful from an organizational point of view. “Everything we have been told about the Qataris is wrong. I went to the Qataris, we were invited, we had dinner with them, it’s extraordinary”, confides a woman.

But beyond football, Qatar has taken advantage of the competition to work on its diplomacy, as when we see in a photo the emir all smiles with Prince Ben Salman of Saudi Arabia, a former enemy. “We saw a normal World Cup and maybe that’s where Qatar succeeded. Nothing says on the other hand, that the controversy will not resume afterwards”, supports Frederic Charillon, author of “War of influence, the States to the conquest of the spirits”. From air-conditioned stadiums, an ecological aberration, to the ban on wearing a One Love armband or the indignation over workers who died on construction sites, the competition has been subject to controversy. Maybe Qatar is not coming out of this ordeal so much.

Today News Post - December 31, 2022 0
The Russian autocrat made this statement during his speech for the new year.Screenshot of Vladimir Putin's greetings, December 31, 2022. (RUSSIA 1) "We will go...

In Nigeria, floods leave 600 dead and more than a million displaced, amid general indifference