This is a subject that concerns the G20 or the COP 27 at the moment, that of the future of our overheated planet. According to the UN, we are going to cross the bar of eight billion inhabitants. A number that challenges. 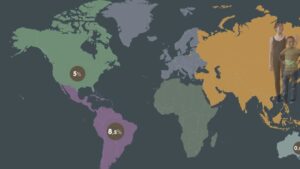 Eight billion inhabitants on the planet is eight times more than 200 years ago and three times more than in the 1950s. Today, more than half of the population lives in Asia, that represents 59 %, far ahead of Africa at 18%. Europe represents 9% of the world’s population. China is still the most populous country with 1.43 billion people, but not for long, because next year it will be India.

10 billion human beings at the end of the century

We will be more numerous on earth, but with disparities. By 2050, with its very young population, sub-Saharan Africa should double its number of inhabitants. In Europe, it will be the opposite effect with less than two children per woman. Several countries should lose inhabitants as is the case of Germany or Italy. In France, at the same time, the population is expected to increase further. Increasingly numerous, but at a slower rate, the population could stabilize around 10 billion human beings by the end of the century.

Today News Post - November 1, 2022 0
The Danish Prime Minister is playing her political future in legislative elections with an uncertain outcome. If the left is opposed to a bloc...