And one and two and three zero! Argentina victory on Tuesday against Croatia for the first semi-final of the World Cup. And great joy of course in Argentina after a game led by a solid team and a captain, Lionel Messi, who showed his magic on the pitch. 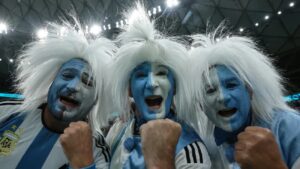 And one and two and three zero! Argentina won 3-0 against Croatia in the semi-final of the Football World Cup on Tuesday December 13, 2022 to the delight of supporters. (AFP)

Messi and Argentina are reaching for their dream: the Albiceleste swept Luka Modric’s Croatia (3-0) on Tuesday in the semi-finals of the 2022 World Cup.And therefore obtained the sixth world final in its history. Thousands of kilometers from Qatar, the joy was experienced live. And it’s a real explosion of joy, followed by countless songs.

The Argentinian team, solid and united, is the pride of Argentinians on Tuesday, December 13. Some gathered in this bar in Buenos Aires to follow the semi-final against Croatia. “We have a team that has a sense of friendship, says Michaela, 37. They are united, professional. I’m really happy. They deserve this triumph. For us, it’s like a caress, a real joy for all social sectors. It’s wonderful.”

In the bar, the Argentinians climb up and dance on the tables. We sing, we kiss. A beautiful and sympathetic euphoria. “I hope Maradona from the sky will help us win the third star,” 13-year-old Tomas said.

“Now we will have to play against Morocco or against France. But France, not because you have this Mbappe who runs at 1,000 km/h!”

Even if Mbappe is scary, many Argentines still want to face France because of this little resentment that remained after their elimination in the quarter-finals at the last World Cup, and remained in the hearts of France under the phrase “Second post Pavard!”. “We want to take our revenge! , Launches Jonathan. Now it’s up to us to carry the trophy, especially since we have the best Messi of all time. It would be nice to see Messi lift the Cup for the end of his career! ”

It is indeed the image of Lionel Messi that is missing from his album. On Sunday, Argentina will play the sixth final in its history in the World Cup. But for now, let’s dream, illusion and party.

Today News Post - October 22, 2022 0
The countries of the Gulf of Guinea are active in the face of the multiplication of jihadist attacks. A Togolese soldier, holding a machine gun,...