This French and American-made machine, which will be put into orbit on Thursday, will increase the definition of images tenfold and provide a large amount of new data for studying lakes, rivers and oceans. 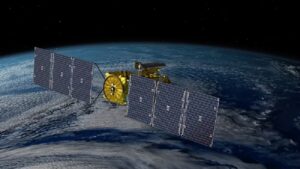 It opens up a “new field of possibilities”. The Swot (Surface water and ocean topography) satellite will enable major advances in the observation of water on Earth. This gem of technology is due to launch on Thursday, December 15. It will be onboard SpaceX’s Falcon 9 rocket, which will take off from Vandenberg Air Force Base in California (United States).

The result of a collaboration between the French Space Agency (Cnes) and the American Space Agency (Nasa), this mission promises to upset our current knowledge. Swot, which will orbit at an altitude of 890 km, is equipped with a revolutionary instrument: a “wide swath interferometer” intended to measure the height of water. Called “KaRIn”, this tool has two radar antennas which are located ten meters from each other, as shown in this illustration image published by NASA.

The heart of SWOT!

A new Earth-observing satellite will survey water on more than 90% of Earth’s surface and see our planet's water in higher definition than ever before. An instrument called the Ka-band Radar Interferometer (KaRIn) is making it possible: https://t.co/TW1YtUQRqu pic.twitter.com/P64cm8cv0w

The signal received by each of the two antennas is slightly different, producing a two-dimensional image. Result: The measurement is more accurate than currently possible. Going from one to two dimensions and having altimeters with less flat representations are some of the main highlights of Swot. “On its own, Swot will provide as much data as six conventional altimeters”, explains Aurelien Ponte, researcher in space oceanography at Ifremer, in a press release.

For Karen St. Germain, director of Earth observation at NASA, “we will have a resolution ten times greater than what current technologies produce to measure the height of the oceans”.

In search of small currents and eddies

With this new high-precision satellite, scientists will be able to take “instantaneous” photographs of phenomena that are sometimes a few centimeters high, such as coastal currents or plumes from rivers flowing into the ocean.

The resolution of current instruments does not allow observing phenomena less than 150 km wide. This is enough to study the gigantic ocean current that is the Gulf Stream or to highlight the warm current called El Nino. With Swot, scientists will somehow be able to zoom in further and observe the seas and oceans at scales previously unattainable.

“A more detailed and finer vision can help to better understand what a current is”, notes Guillaume Charria, also a member of the Swot scientific team. “For example, we’ve already seen that large ocean currents are not just linear water flows but are very turbulent. We’re going to go one step further” with this new satellite.

Localized currents and eddies, about a few tens of kilometers wide, have not yet been able to be scrutinized. However, they have a significant impact on the surface water temperature, heat transfer, as well as the absorption by water of carbon dioxide (CO2, the main greenhouse gas) present in the atmosphere. Any new knowledge to better characterize these phenomena is important because the climate machine is strongly linked to the oceans, the latter acting as a giant thermostat.

Guillaume Charria highlights the possibility of having a spatial idea of ​​the currents which, for the moment, can “very well be measured but in a punctual way”. This new knowledge may have impacts on ocean forecasts. Short term for navigation, or long term for climate models.

Swot will not only be interested in seas and oceans. Lakes, rivers, rivers are also on its menu. The power of the instruments will make it possible to look into continental waters that are not yet observed, drastically increasing the volume of information. While we currently have data on a few thousand lakes around the world, thanks to Swot, we will have at least two million, according to NASA.

Like polar ice, lakes record climate history. They can bear witness to ongoing climate change if we document the rise in water temperatures, the reduction in their ice cover or even variations in water levels. Over the last century, the surface temperature of the water in the Great Lakes in the United States has increased by 3.5°C, illustrates the Cnes.

“On rivers and rivers, we are going to have finer estimates of flows, notes Guillaume Charria. In France, rivers are very well monitored with instruments on site, but this is not the case everywhere in the world”, recalls the researcher.

Finally, all knowledge of the water cycle on Earth, from precipitation to evaporation, including pumping for cities and irrigation for crops, must be enriched. Eventually, all the data collected by Swot will be associated with other satellite observations to improve the management of water resources on our planet.

Today News Post - December 8, 2022 0
The families of the 228 victims of the Rio-Paris crash are angry. After eight weeks of trial, the prosecution asked the court to release...