They were discovered in a “locked cupboard” on the premises of a think tank, a legal adviser to Joe Biden reported Monday evening. 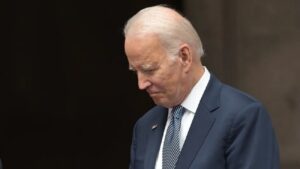 There they were, in a “locked closet” somewhere in Washington. Confidential classified documents dating from the vice-presidency of Joe Biden (under Barack Obama from 2009 to 2017) were found in the premises of the Penn Biden Center, a think tank in the American capital, which the current president has sometimes used as a workplace.

His lawyers say they discovered the documents in November while emptying these premises. “The White House is cooperating with the National Archives and the Department of Justice,” said Richard Sauber, its legal counsel, in a statement. “The documents had not been the subject of any prior request or request” and, since their delivery to the Archives, Joe Biden’s lawyers have continued to cooperate in order “to ensure that the Archives are in their possession from any Obama-Biden administration archive,” he added.

According to the American television channel CBS News, the Minister of Justice Merrick Garland ordered the federal prosecutor of Chicago to review the documents, and the federal police (FBI) also opened an investigation. Quoting an anonymous source, the media specifies that a dozen documents are concerned and none contain nuclear secrets.

“When will the FBI search Joe Biden’s many residences, or even the White House?” Donald Trump responded in a statement. The FBI had carried out a spectacular search of the former Republican president’s residence in Florida in August in order to recover thousands of documents, including a hundred classified defense secrets, taken by Joe Biden’s opponent after his departure from the Maison Blanche and which he had until then refused to return to the Archives.

Today News Post - January 10, 2023 0
It will take many weeks for the presidential palace in Brasilia, left as a battlefield after the intrusion of thousands of supporters of Jair...

United States: divided, the Republicans fail to elect the speaker of the House of Representatives in the first round