Two hundred and fifty-six players are in the running for the first Grand Slam of the year 2023, which begins on Monday. 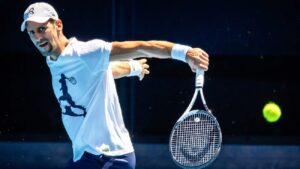 As usual, the Australian Open will kick off the tennis Grand Slams. A year after the coronations of Rafael Nadal and Ashleigh Barty, the Australian tournament resumes its rights from January 16 to 29.

This first major meeting is marked by the return of Novak Djokovic to Melbourne, a year after the imbroglio linked to his vaccination, but also by notable absences. On the French side, Caroline Garcia is leading the way.

Novak Djokovic, a comeback and a 22nd Grand Slam in the sights

A year after the soap opera of his expulsion from Australian territory, due to his non-vaccinated status against Covid-19, Novak Djokovic returns to the courts of Melbourne. The world number 5 intends to make up for lost time and regain his place at the top of the ATP rankings.

On Australian soil, “Nole” is advancing on conquered ground. At the Australian Open, he has not lost since a round of 16 against Chung Hyeon in … 2018 and remains on three consecutive titles. It was in the Rod Laver Arena that the Serb won his first Grand Slam in 2008 against Jo-Wilfried Tsonga, before lifting eight more in Melbourne.

Without prejudging the reception that will be reserved for him in Melbourne, Novak Djokovic made his return to Adelaide to the applause of the Australian public. Unstoppable since Wimbledon 2022 (five titles, 31 wins, two defeats), the Serb, even at 35, is a tournament favorite. If successful, he would clinch his 10th crown in Melbourne and join Rafael Nadal on 22 Grand Slams, leaving Roger Federer two points behind.

If there is a name to remember on the tricolor side, it is that of Caroline Garcia. After an exceptional second half of the season (victorious in Cincinnati and at the Masters, semi-final at the US Open), the Frenchwoman arrives in Melbourne in fourth place in the world. She will face a qualifier, the Canadian Katherine Sebov, in the first round, before perhaps crossing swords with Alize Cornet in the second round, the only other French player present in the top 100. In her career, Caroline Garcia has never did better than a round of 16 in Melbourne (in 2018).

In total, 18 Habs will defend their chances in the final table. In the absence of Gael Monfils, but with three members of the top 50 (Adrien Mannarino, 43rd, Arthur Rinderknech, 45th, and Benjamin Bonzi, 50th), the male contingent can create surprises. Among the thirteen players entered, two won their place in qualifying (Enzo Couacaud and Laurent Lokoli) and the young Lucas Van Assche (18) received an invitation. They will be accompanied by veterans Jeremy Chardy (35) and Richard Gasquet (36), winner in Auckland on Saturday.

On the women’s side, five French women are involved: in addition to Caroline Garcia and Alize Cornet, Clara Burel (21 years old), Diane Parry (20 years old) and Selena Janicijevic (20 years old). If Clara Burel and Selena Janicijevic came out of qualifying, unlike Kristina Mladenovic (beaten 3-6, 6-4, 2-6 by Katie Volynets) and Leolia Jeanjean (eliminated 4-6, 2-6 by Lesia Tsurenko), Diane Parry was able to benefit from an invitation for the main draw. All three, ranked above 100th in the world, represent the future of French tennis. His present too?

If many tenors of the circuit will be there, major absences are to be deplored, in particular that of the world number one, Carlos Alcaraz. “When I was at my best in pre-season, I picked up an injury. This time it was the semi-membranosus muscle in my right leg,” the Spaniard announced on January 6.

Disappointing in the 2022 edition (eliminated in the third round by Matteo Berrettini), Carlos Alcaraz (19) was undoubtedly hoping for a better start to the year, after his delicate end to the season following his US Open title ( defeats in the semis in Basel and in the quarters at Bercy, absence from the Masters). Designated seed number 17 in the draw, Croatian Marin Cilic also forfeited a tournament where he reached the final in 2018. Among the French, Gael Monfils, currently 83rd in the world, will miss the call. Injured in the foot since August 2022, he had reached the quarter-finals last year.

Another notable absence, but on the women’s side: that of Naomi Osaka, winner of the Australian Open twice. Injured since September and her abandonment during the Tokyo tournament, the quadruple Grand Slam winner, who is now ranked 47th in the world, has announced that she is pregnant. Venus Williams will also not be in the game. Victim of an injury during the Auckland tournament (New Zealand), the 42-year-old American had to give up. Finally, former world number one Simona Halep will miss the Australian Grand Slam due to her suspension since October for a positive doping test.

United Kingdom: two years later, is Brexit responsible for the social movements that are shaking the country?