Russia has just named a new commander of the offensive in Ukraine, as journalist Lionel Feuerstein explains, live from Moscow, Thursday January 12. This is the second general appointed in three months. 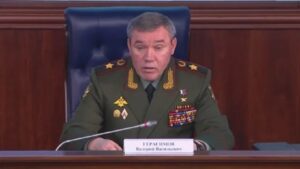 Russia has appointed a new offensive commander in Ukraine, Valery Gerasimov, as journalist Lionel Feuerstein explained, live from Moscow Thursday, January 12: “Is this a sign of an admission of weakness? In everything case, it only took three months to replace the implacable Sergei Surovikin, nicknamed ‘General Armageddon’. For the Kremlin, the one who had forged a sinister reputation in Syria was the man for the job to lead operations in Ukraine.”

Sergei Surovikin “is now demoted to General Valery Guerasimov’s deputy,” the journalist said. “At 67, Russia’s highest-ranking Chief of Defense Staff will have to do better than his predecessor and regain ground with significant and quick victories. For the first time in six months, with the presence of the paramilitary group Wagner, the Russians are about to conquer the city of Soledar”, adds Lionel Feuerstein.

Today News Post - October 26, 2022 0
One of these avenues is the establishment of a blood alcohol offense with the same rules as for motorists. Hunters will therefore not be...