Like every day, the 11 p.m. news takes a tour of the news broadcast by European television channels. It’s Eurozapping on Thursday, December 1st. 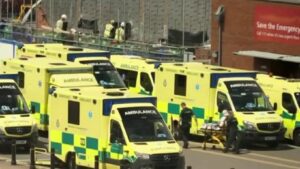 Spain is the target of an envelope bomb campaign. Thursday, in the morning, it was at the United States Embassy that one of them was discovered. The day before, an employee of the Ukrainian embassy had been injured. Six envelopes of this type were intercepted.
Pediatric hospitals are sounding the alarm in Germany. In a facility in Munich, many young patients are turned away. With the arrival of respiratory diseases, all services are on the verge of asphyxiation. They deplore the lack of personnel.

Britain is running out of beds

In Great Britain, ambulances no longer arrive in time. Dozens of vehicles find themselves blocked in front of the ambulances for lack of beds to accommodate people in need of treatment. This winter, excess mortality is estimated at 25%.

Germany: the video of the “disastrous” wishes of the Minister of Defense is controversial