The midterm elections in the United States on Tuesday, November 8 represent a major issue in a divided country. Democrats and Republicans try every means to demonize their opponents. 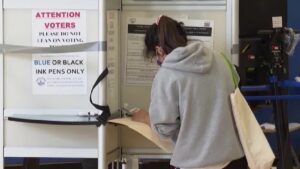 Tuesday, November 8, Americans went to the polls to vote for the midterm elections. Many of them expressed their anger and resentment towards the other party. “The Democrats are killing this country, destroying this country. America is collapsing because of them,” laments an American. “The Republicans are an increasingly fascist party, a party that takes away the right to abortion for women,” denounces a man for his part.

Biden is an enemy of the state, says Donald Trump

Among the voters who came to the polls, some are more alarmist than others. “I believe in a civil war. I am not a democrat, but I voted for them, to avoid the worst”, explains a former soldier. Whether on social networks or in meetings, each side has tried in every way to demonize the other. “Biden is an enemy of the state,” said Donald Trump in particular about the current president of the United States.

Today News Post - November 13, 2022 0
Some 200 Ukrainian police were deployed in Kherson to clear mines and document "crimes" attributable to Russian forces, a day after the city was...