The states of Arizona, Georgia and Nevada have still not announced the results of the senatorial elections. The slowness is explained by the number of postal votes. 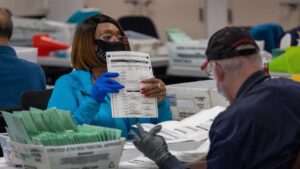 The suspense may last a little longer. Some results are still awaited in the United States, nearly two days after the midterm elections held on Tuesday, November 8. This is the case for the senator seats in play in Nevada, Georgia and Arizona, but also for several seats in the House of Representatives. As a result, it is currently impossible to know who, Democrats or Republicans, will control the Senate. The fault in particular with a very slow counting of the ballot papers.

The reasons for this snail-like appearance vary by state. In Arizona, it is linked to postal voting, chosen by about 80% of voters in the state, reports CBS*. This process takes much longer than voting in person, due to the signature verification process, which sometimes requires contacting a voter to verify their identity. A printing problem affecting 60 polling stations in the state also affected the count, reports PBS*.

A second round in Georgia

The explanation is the same in Nevada, where it has only been possible to vote by mail, with a few rare exceptions, since 2020. In addition to the volume to be processed, the state also accepts votes mailed on November 8, election day. , as evidenced by the postmark. This explains the delay in announcing the final results, the letters taking several days to arrive at the counting centres. This rule is also in place in California, where many seats at stake in the House of Representatives still have no winner, and in the state of Washington, recalls Reuters*.

As for Georgia, the results will not be known until 6 December. In question, a rule which obliges the organization of a second round if no candidate has reached 50% of the votes in the first round. The state “is set to become the center of the political universe for the next four weeks”, explains Politico*.

Today News Post - December 2, 2022 0
The security officer at the Ukrainian embassy in Madrid was slightly injured when a letter bomb intended for the ambassador exploded on Wednesday. The...