This gigantic production site, in central China, has been confined since mid-October after the detection of an outbreak of Sars-CoV-2. 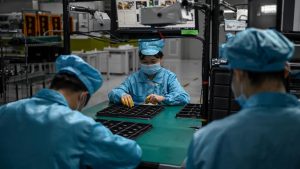 The largest iPhone factory in the world, in China, promised, Tuesday, November 1, bonuses multiplied by four to employees agreeing to stay on site despite confinement linked to cases of Covid-19. The site, managed by the Taiwanese group Foxconn and which employs more than 200,000 people, has been confined since mid-October after the detection of an outbreak of coronavirus.

To retain its employees, Foxconn announced on the WeChat social network that it would pay a daily bonus of 400 yuan (about 55 euros) per day at work, four times the usual amount. Staff will also receive an additional bonus if they are present at the factory for at least 15 days in November. This bonus can reach 15,000 yuan (2,075 euros) in the event of attendance for the entire month.

Employees on the run

Videos of employees complaining about their working conditions and a lack of protection from the virus were shared on social media over the weekend. Images have shown some workers fleeing the factory with their suitcases and climbing over a fence to walk home.

Workers have broken out of #Apple’s largest assembly site, escaping the Zero #Covid lockdown at Foxconn in #Zhengzhou. After sneaking out, they’re walking to home towns more than 100 kilometres away to beat the Covid app measures designed to control people and stop this. #China pic.twitter.com/NHjOjclAyU

“I only took a purse, three packets of instant noodles, four bottles of milk, two bottles of water and some bread,” a female employee told state-run China Newsweek. Foxconn, Li Yan, who explains that she had to walk three hours after escaping from the factory located in the city of Zhengzhou (center), 600 km from Beijing.

A factory official told China Newsweek that no serious cases had been recorded and that the situation was “controllable” so far. The company assures “cooperate with the government to organize staff and vehicles” and allow employees to leave if they wish. Although not high, the number of Covid cases in China has been on the rise in recent days. On Tuesday, more than 2,000 new positive cases were announced in the territory for the second day in a row.

Today News Post - November 19, 2022 0
The European Union's Emergency Response Coordination Center in Brussels has been providing shelter, food, vehicles or medical aid to Ukrainians since February. An employee of...