Hu Jintao, who served as China’s president from 2003 to 2013, was tricked by staffers into rising from his seat, which sits next to Xi Jinping in the front row of the People’s Palace. 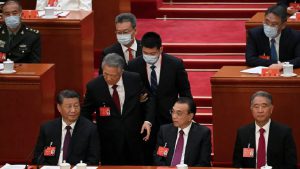 A very unusual incident. Hu Jintao, former Chinese president, was escorted out of the closing ceremony of the Chinese Communist Party (CCP) congress on Saturday, October 22, AFP journalists noted. These facts were neither explained nor reported by Chinese state media.

Early drama: Hu Jintao seen being led out soon after reporters are led into the main hall pic.twitter.com/pRffGZF60I

Hu Jintao, who served as China’s president from 2003 to 2013, was tricked by staffers into rising from his seat, which sits next to Xi Jinping in the front row of the People’s Palace. An employee tries to take the arm of the 79-year-old former president, visibly weakened, but the latter refuses. The individual then tries to lift him by the armpits, but Xi Jinping’s predecessor continues to resist. Hu Jintao tries at the same time to embark documents placed on his desk, which seem to belong to the Chinese number one. Xi Jinping holds them firmly. A conversation of about a minute ensues between the employee and Hu Jintao. The former leader is finally convinced to leave the premises, visibly reluctantly. Held by arm, Hu Jintao is escorted out. As he stands up, he has a brief exchange with Xi Jinping, who answers him without looking at him, and Premier Li Keqiang, whom he pats on the shoulder. The audience seems impassive.

This sequence took place shortly after the press entered the People’s Palace in Beijing, to cover the closing ceremony of the congress. Xi Jinping, 69, should obtain a third term as general secretary of the party on Sunday, which guarantees him a third presidential term next March.

The name “Hu Jintao” appeared censored Saturday afternoon on the Weibo social network, China’s equivalent of Twitter. Only information from the day before, and from official accounts, was available.